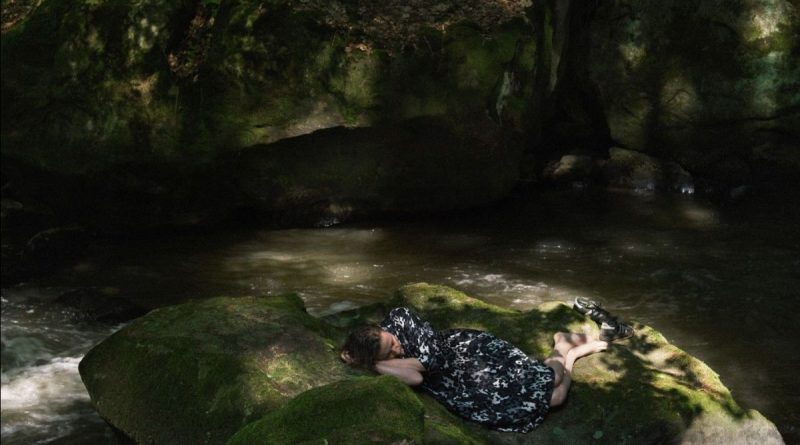 I Was at Home, But offers a perplexing, provocative experience.

The film opens on a rabbit racing across rough terrain, a dog running in pursuit. The rabbit pauses and rests on a rock. Cut to a donkey walking into a room in an abandoned house. Cut to the dog hungrily eating his prey, and it’s fair to wonder what this film has in store.

The answer in writer/director Angela Schanetec’s tenth feature is an imaginative, disjointed story of love and loss. Her unusual introduction announces an equally creative, loosely connected series of scenes for which, she says, “You don’t have to think. You can just watch.” This is the best advice as characters come and go, revealing or merely suggesting ideas as profound as they are elusive.

What the story ambiguously establishes consists of diverse threads. The most central individual, forty something Astrid, mother of two children, became a widow two years earlier. She alternates between steely silence and assertive, even volatile, reactions. Her thirteen-year-old son Philip, just returned from a perplexing absence, rehearses a part in his school’s production of Hamlet. Various characters long for or can’t resign themselves to unfulfilled love, and the purchase of a bicycle figures prominently, and humorously, in several scenes.

Most memorably, a calm but confrontational exchange between Astrid and a film director probes the essential nature of cinema itself: reality versus pretense, acting as opposed to truth. It articulates serious philosophical issues that reverberate far beyond its presentation here.

Superb compositions, sound and music design, and performances keep the unfolding world immensely absorbing and disarming, offering the experience of dropping into vivid moments. But, as Schanetec advises, an expectation of linear, conventional storytelling for I Was Home, But won’t find fulfillment here. In German with English subtitles.