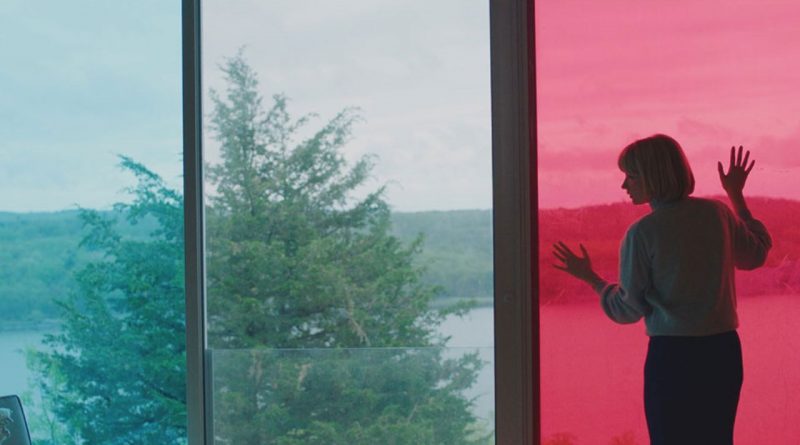 A young housewife married to a wealthy man develops a compulsion to swallow inedible objects, in the disturbing psychological drama Swallow. “Housewife” is a term rarely used now, but it fits Hunter (Haley Bennett) perfectly, who is the very image of the perfect 1950s housewife, although the story is clearly set in the present. Hunter has a seemingly pampered life of comfort and leisure in a beautiful home, with a handsome husband who has a bright future in his father’s prosperous business. Alone in the house, she fills her day with arranging cushions, cleaning and cooking dinner, waiting to greet her husband at the door perfectly coiffed and dressed in pink. Passive and submissive, Hunter even asks her husband for permission to plant flowers in the yard.

While her husband professes to love her, he largely ignores her and controls her, and both he and his family discount anything she says, leaving her powerless on the sidelines of her own life. When she becomes pregnant, her husband and his family are overjoyed, and she briefly hopes things might change. Instead the control tightens. Under enormous stress, Hunter is diagnosed with pica, a psychological illness in which people have a compulsion to eat non-nutritive things like paper, dirt or ice. But Hunter’s compulsion takes a far more frightening form, as she begins swallowing sharp and dangerous objects.

Swallow develops into a chilling thriller, bordering on horror. Bennett gives an affecting performance as this woman in pain, and the family’s disturbing response evokes shades of Rosemary’s Baby. The film is often unsettling to watch, but while it has its flaws, it takes a turn toward empowerment by its end. Writer/director Carlo Mirabella-Davis’ script and direction, paired with Katelin Arizmendi’s lush photography and Bennett’s performance, craft a disturbing psychological thriller with a satisfying, unexpected denouement.