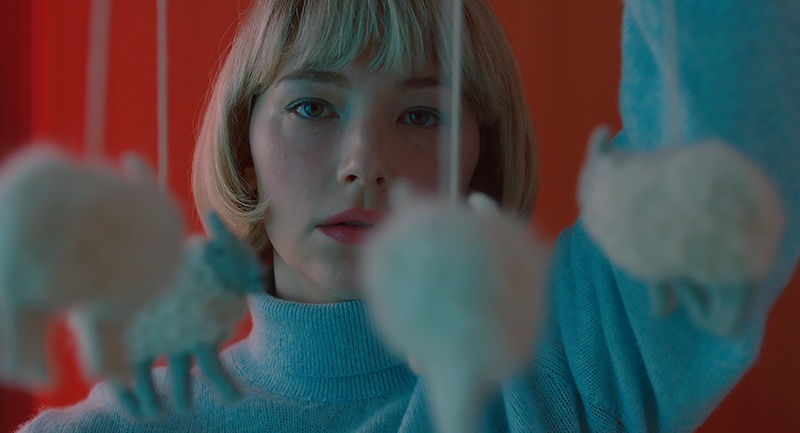 With Swallow, writer/director Carlo Mirabella-Davis and star Haley Bennett, who gives a stunningly modulated performance, have crafted a contemporary horror film laced with black humor and an empowerment message. As Hunter, the bobbed blonde, doll-like trophy wife, Bennett presents a living nightmare of a young woman trapped in an “ideal marriage.” Her handsome, wealthy husband Richie (Austin Stowell) seems caring but is more interested in his career and social standing; even Hunter’s pregnancy is cause for celebration for what it means to the family business and legacy.

The in-laws (played by David Rasche and Elizabeth Marvel) wield Rosemary’s Baby-like passive- aggressive control over their prized son’s life. “Richie likes his girls with long, beautiful hair,” is the advice dispensed by Hunter’s wolf-in-sheep’s-clothing mother-in-law. As Hunter begins to swallow objects — a push pin, a battery, a marble, dirt — and is diagnosed with pica, her internal turmoil mirrors the judgment of the world around her. As queasy as the Swallow premise sounds, Mirabella-Davis stages the shocking acts in elegant, formal shots. Hunter’s handling and ingestion of each object is treated with the ritualistic fetishism that matches her artificial, Stepford surroundings. In one scene, she cleans her perfect home clad in a fashionable pink seater and slacks; with her perky flip hairdo, she’s like a demented Doris Day.

The trope of the ultra-modern, glass enclosed, isolated house as metaphor for the vacant soul of wealthy suburbanites, from “Parasite” to the new “The Invisible Man,” is also used effectively here, as Hunter is imprisoned by repressive social and gender roles that have robbed her of control. After some harrowing scenes, Hunter reaches the breaking point and realizes that the source of her harmful compulsion is deeply buried rage at misogyny and institutional oppression. The film’s resolutions may seem a bit pat especially Hunter’s confrontation with a man from her past (Denis O’Hare). But Swallow is a rare, original feminist thriller whose mounting horrors gradually reveal that the hidden monster is the patriarchy.