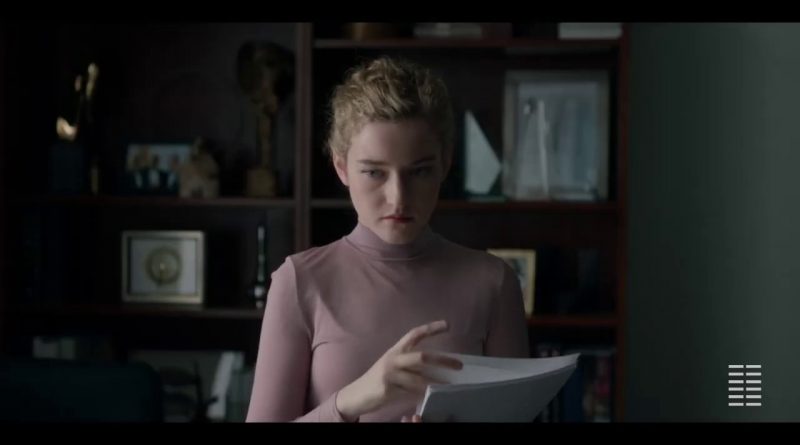 Unfolding over one, long exploitative workday, it focuses on Jane (Julia Garner), who is beginning her second month as a lowly assistant to an unseen/anonymous Manhattan-based movie producer.

When it’s still dark outside, Jane dutifully leaves her apartment in Queens, becoming the first to arrive at the company’s Tribeca office. She quietly prepares the morning coffee, lines up the individual water bottles and cleans stains off the cushions on the couch.

Since her boss is scheduled to fly to Los Angeles at 11 p.m. with two additional passengers, Jane must confirm that, along with his reservation at the Peninsula, field phone calls from his suspicious wife and usher a beautiful blonde in for a meeting.

Hours pass. Jane returns the gold bracelet that an Asian woman inadvertently left in the boss’s office. Ambitious male assistants (Jon Orsini, Noah Robbins) come and go, each having been assured that compliance will assure advancement.

Eventually, distressed Jane realizes exactly how her lascivious boss is manipulating and abusing aspiring actresses, ingénues who naively believe that their acquiescence will somehow propel them to film stardom – like the young waitress he flew in from Idaho and ensconced in a hotel.

But who can Jane tell? Who will care? And will there ever be any consequences to her boss’s predatory behavior?

When Jane timidly approaches a Human Resources representative (Matthew Macfadyen) to report what she’s seen and heard, the tension is palpable. His reaction is to laughingly assure her: “You’re not his type.”

“Almost everything that’s in the movie has been recorded already in the news,” Australian writer/director Kitty Green acknowledges. “But what I wanted was some kind of emotional insight.”

On the Granger Movie Gauge of 1 to 10, “The Assistant” is a restrained, sensitive 6, chronicling an all-too-prevalent misogynistic culture of complicity.