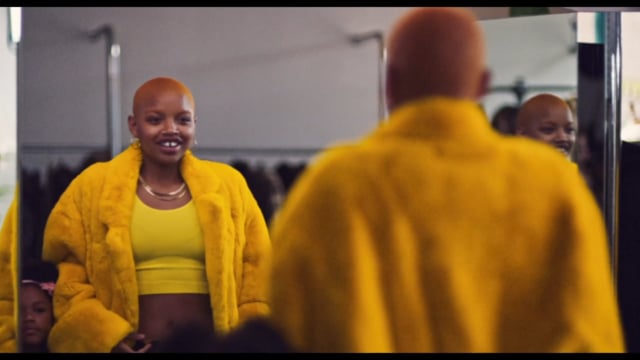 Even as I write this review, I’m uncertain how I feel about Goldie. So I’ll start with what I know. Slick Woods is magnificent. As a model, she has magnetism that pulls you into photos and keeps your gaze traveling with her on the runway. Jumping from any other field into acting can be dodgy but Woods turns her appeal all the way up on screen. It’s because of her, and her alone, that we are pulled through this film.

I’m also sure that writer/director Sam de Jong has a love for 1980s NYC. You immediately see the influences of iconic 80s street artists like Basquiat and Haring in the animated art that swirls across the screen throughout Goldie. And despite the contemporary time period—as witnessed by mobile phones and current slang—that particular style of 80s indie filmmaking infuses de Jong’s aesthetics. You can almost hear the voices of Darnell Martin, Matty Rich, and Spike Lee. And there’s a decade spanning timelessness about Goldie. If you forget about the phones and the social media, it could be happening in the 80s, or the 90s, or now.

The story is essentially a character study. Goldie is a teenage influencer in the making. Her biggest talent is her personality and with the right viral moment she could blow-up. Goldie is well aware she’s on the verge and it gives her the confidence to try and fake her way onto a music video for rapper Tiny (A$AP Ferg). The video is part of a mental dreamboard Goldie carries in her head. Another treasured image is of a bright marigold mink coat. In moments very much like Holly Golightly in Breakfast At Tiffany’s, Goldie returns to the store window again and again to visit the golden coat and reaffirm her dream. Yet that dream is deferred when Goldie’s mother Carol (Marsha Stephanie Blake) is arrested and Goldie goes on the run to keep her little sisters Supreme (Jazmyn C Dorsey) and Sherrie (Alanna Renee Tyler-Tompkins) out of the system of Child Protective Services.

Structurally, the film is composed of Goldie’s interactions with various people. Each of them is introduced with an animated card, while the little sisters yell out the character’s name. Without fail these interactions take another chunk out of Goldie’s hope. Whether she turns to crime or to friends & family or to legitimate work, it’s amazing how many different ways these people find to let her down. Ultimately everyone asks Goldie to conform. She fights it but you begin to see her sag. And since we’re never given Goldie’s perspective on why the prospect of Child Protective Services is such a monster, and because she is reckless with what little money she earns, we don’t know why Goldie is fighting or have definitive reasons to stand behind her (other than her charm, which I admit is planetary).

I think I get it now, this ambivalence I feel about the film. I adore a ‘black girl story’ and a lead like Woods’ Goldie is a joy to see. Yet this is a film about disappointment and sagging dreams; about the ways life punches down on black women and girls—no matter how bright. Everyone tells Goldie the same thing, they all offer the same solution, and none of them offer help outside of advising her to obey societal norms. While I appreciate the arthouse vibes and the magnetism of the lead, Goldie is ultimately an allegory for conformity. And, damn, that hurts.