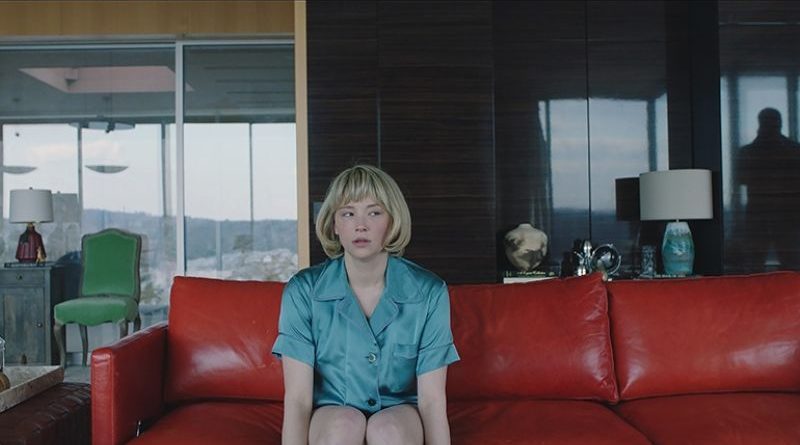 Carlo Mirabella-Davis’ tense drama Swallow — about a repressed young wife who finds herself compelled to eat unusual and even dangerous things — gives new meaning to the phrase “eating your feelings.” Desperate to please her handsome husband, Richie (Austin Stowell), and his wealthy parents, Hunter (Haley Bennett) tries to create the perfect life in their designer-ready home. But things are far from perfect under the surface. 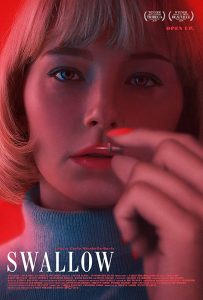 Richie claims to be devoted to his bride, but his behavior says otherwise: He’s patronizing and condescending, and Hunter never feels sure of her worth in his eyes (or his parents’). As her insecurity and doubt mount, she’s further thrown for a loop to discover that she’s pregnant. Instead of craving pickles and ice cream, Hunter can’t stop herself from eating marbles, push pins, and dirt. When her condition — called pica — lands her in the hospital and brings Richie and his parents’ wrath down upon her, she starts seeing a therapist, and unresolved issues from her past threaten to undo her completely.

Swallow isn’t an easy movie to watch. Hunter’s compulsions are off-putting at best and mortally dangerous at worst, and her self-destructive desperation to please Richie is tragic. This is a woman who has never dared to be her true self around the people who are supposed to love her the most — she works tirelessly to give them what she thinks they want, but it’s never right, or enough. Even when she’s clearly suffering, their response is to treat her like a mentally unstable child.

Bennett commits fully to the role, balancing Hunter’s fear and vulnerability with a streak of tenacity and daring that can’t quite be suppressed, no matter what Richie and his parents do. Her performance — combined with a moody score, stylish costumes, and vivid production design — makes Swallow as hard to ignore as the perfectly glassy, swirly marble that Hunter craves. — Betsy Bozdech

Nikki Baughan: Combining a cool Hitchcock aesthetic with 70s-esque suburban paranoia and a modern narrative sensibility, Swallow is an intriguing, exciting feature debut from Carlo Mirabella-Davis. Anchored by an astonishing performance by Hayley Bennett as the softly-spoken, psychologically traumatised trophy wife of a arrogant rich kid, it’s a beautiful, devastating study of everyday female oppression. When she’s not rattling around her gorgeous New York home, Hunter (Bennett) is being routinely belittled or ignored by her husband’s family, who clearly think they are better than her. Her burgeoning pregnancy doesn’t make for any better treatment; they are more concerned about the child than her. As she swallows every veiled insight, every slight, with a small smile, she becomes overwhelmed with a desire to imbibe household objects; first a marble, then a pin, then a battery. This leads to psychological treatment, which unveils a distributing past. Such a story could easily become exploitative, but Mirabella-Davis strikes the perfect tone. Hunter is clearly not crazy, and our sympathies lie entirely with her. It is also her story, told through her eyes, and, even if most of us have never been compelled to eat the ornaments, we can easily understand the overwhelming pressure of daily persecution that drives her behaviour.

Marina Antunes Control. At some point in our lives, we’ve all felt some semblance of loss of control and while sometimes those “moments” feel more like eternities, we get over them, either on our or own or with the help of friends, family and sometimes with medical intervention. Carlo Mirabella-Davis’ Swallow explores one woman’s struggle with control. While outwardly living the perfect ideal life – beautiful home, rich and handsome husband – Hunter feels trapped. She’s built a facade for her husband and his family and with a baby on the way, panic sinks in. In a moment of desperation, she swallows a marble and soon, she’s eating everything from batteries to tacks. Though Mirabella-Davis plays the first half of Swallow like a horror movie complete with intense score from Nathan Halpern, the second half is a beautiful story of self-discovery and empowerment in which Hunter, played brilliantly by Haley Bennett, comes to terms with her past and sets forth on a new life. And that ending… perfection.

Leslie Combemale Swallow might be have a secondary title that goes something like “Agency, and What a Gal Will Do Just to Get a Little for Herself”. Psychological horror and domestic drama make creepy bedfellows in a movie that feels like Repulsion meets Diary of a Mad Housewife meets Stepford Wives in reverse. You might wonder why a male director would make such an ultimately feminist movie. It is inspired by writer/director Carlo Mirabella-Davis’s grandmother Edith Mirabella, a homemaker in the 50s who developed rituals of control, was placed in a mental institution by her husband, and subsequently given shock treatment and a lobotomy. He does right by his granny through the slow, tortuous devolution of lead character Hunter Conrad, as played Haley Bennett, who, going forward, might deserve at least half the roles offered to Florence Pugh. The film is a bold statement about the internalized struggle for agency many women find they can only articulate through self-destructive behavior.

Susan Wloszczyna: With its echoes of Rosemary’s Baby and a bewitching leading lady who checks off many of the qualifications of being a Hitchcock blonde, Swallow is a somewhat uneasy watch that tip-toes close to a body-horror thriller. Writer-director Carlo Mirabella-Davis’ haunting film doesn’t always go down smoothly but it does expose how marriage can be a trap, family skeletons continue to rattle and freedom is just another word for nothing left to lose. Read full review.

Jennifer Merin Harrowing, horrific and heartbreaking, Swallow is Carlo Mirabelle-Davis’ beautifully crafted and quite discomforting drama about a woman with pica, an uncommon compulsive disorder that entails the ingestion of indigestible objects, including dangerously sharp metal and plastic items and soil. Yes, it’s a real disorder. In Swallow, it’s Hunter Conrad (Haley Bennett), a young and newly pregnant wife, who is afflicted. The compelling narrative observes Hunter’s stifling marital environment and delves deep into the psychological frame of mind that precipitates her self destructive pathological behavior. Haley Bennett’s performance is awesome. Truly triumphant!

Liz Whittemore Isolation, control, fear, wonder — these are all emotions surrounding pregnancy. It is one of life’s ultimate dichotomies. You can attempt to positively guide the health of your child but in reality, have very limited power over how your body reacts to making another human. There is enough to worry about without adding an eating disorder into the mix. Pica is one that is usually associated with pregnancy. It is an uncontrollable desire to consume things that are not conventional and of no nutritional value. In Swallow, naive trophy wife Hunter desperately tries to maintain some sense of personal order but in turn, only causes her restraints (both emotional and physical) to tighten. Therein lies the genius of Swallow. Pica is a metaphor in so many ways in this script. This film is about trauma. The coldness of sparse midcentury modern architecture set against the brightness of specific and important objects is simply stunning. The textures in Swallow are equally gorgeous and gag-worthy. Topped off by the performance from our leading lady Haley Bennett, who won the Best Actress award at last year’s Tribeca Film Festival for this role, this is a visceral viewing experience that will either captivate or drive you away. If you can stomach Swallow, you will be rewarded.

Sandie Angulo Chen: Swallow is the kind of film you keep thinking about long after the credits roll. Haley Bennett gives an extraordinary performance as Hunter, a young affluent housewife whose unexpected pregnancy leads to a compulsive eating disorder called Pica (the swallowing of indigestible objects, including sharp and dangerous ones like push and safety pins and batteries). Writer-director Carlo Mirabella-Davis explores how Hunter’s seemingly picture-perfect life is actually stifling and unsatisfying thanks to her controlling husband’s (Austin Stowell) toxic masculinity. Bennett, whose Hunter looks and sounds like a cross between Michelle Williams and Marilyn Monroe, is magnificent as a woman who knows she’s supposed to be happy with a life of leisure, a handsome, rich husband and an Architectural Digest home, but who begins to take her own, however dangerous, control over her body in an obvious feminist metaphor for the myriad ways women don’t feel their bodies are really their own. David Rasche and Elizabeth Marvel are equally as fabulous as Hunter’s overbearing in-laws. While not for easy viewing (particularly the medical procedures), Swallow is an original and thought-provoking film with award-worthy central performance.