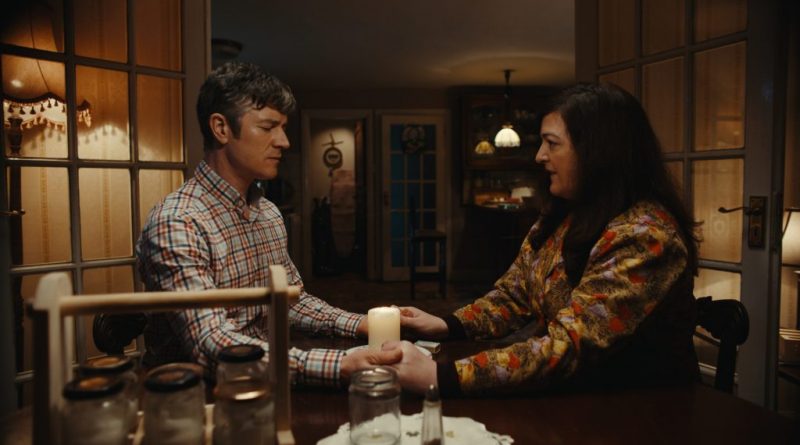 Sweet, clever and wryly funny, the Irish bogey tale Extra Ordinary. walks the fine between poking fun at genre tropes and mocking them. It’s more closely aligned with Beetlejuice than the crude Scary Movie franchise, and its carefully drawn characters—even the scene stealers—make for an experience that’s surprisingly emotionally satisfying.

Rose Dooley (Maeve Higgins) is a driving teacher, a gentle soul who lives in the shadow of her late father, Vincent Dooley (Risteard Cooper), a ghost hunter whose exploits were chronicled in a popular television show. Rose adored her father and inherited his genuine talent for speaking with the departed but wants nothing to do with spirit whispering after a bad childhood brush with the beyond. Which doesn’t stop people who imagine they have paranormal problems badgering her with messages all these years later, all of which she ignores.

But fate—in the form of doubly-beleaguered widower Martin Martin (Barry Ward)—drags her back in to the exorcism game. First he’s afflicted with poltergeist phenomena–suicidal dishes, skittering doughnuts, rattling windows—then, his sleeping adolescent daughter, Sarah (Emma Martin), starts levitating and floating creepily around the house. The source of the hocus pocus is washed-up American pop star Christian Winter (Will Forte), who bought the obligatory country castle at his career peak (mostly as a tax dodge, back when the big bucks were rolling in) and is willing to sell his soul for another shot at rock and roll fame. But he needs a virgin sacrifice for the demon he wants to invoke, and Winter’s phallic divining rod, a centuries-old artifact to which his abrasive wife (Claudia O’Doherty, wickedly mean) pointedly refers as his “dick stick, points to Sarah.

And so the gears begin humming: Martin and Rose are thrown together under the sort of circumstances that forge romance in the fires of adversity, in this case as flying dishware, demonically rattling rubbish bins, ectoplasm-vomiting—so much ectoplasm vomiting—and rising-damp stains (this is Ireland, remember) that look like dearly-departed auntie Deirdre.

And it’s thoroughly charming: Ward and Martin have a lovely, awkward chemistry, and Ward’s character takes a turn that’s both very funny and technically a joy to watch. Forte’s fatuous histrionics never descend into tedious buffoonery—Christian Winter is an ass, but he’s willing to raise literal hell if it will put him back on the charts. Extra Ordinary. is also sharply written and directed by first-time feature filmmakers Mike Ahern and Enda Loughman, and features strong supporting performances by Terri Chandler and Jamie Beamish as Rose’s sister and her boyfriend, who come into their own as literal hell breaks loose.

And it makes wonderful use of the sheet ghost (a Halloween-costume staple supplanted by ever-more elaborate commercial creations), a visual trope that had all but vanished before being resurrected here and, to very different ends, in Casey Affleck’s 2017 A Ghost Story. Extra Ordinary. is good, snappy fun with an emotional core; the kind of movie that’s easily lost in multiplexes dominated by big, noisy movies that gobble up most of the screens but whose modest parts coalesce into a thoroughly enjoyable whole.