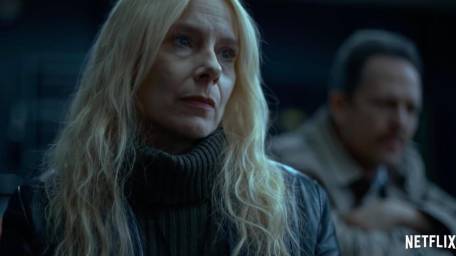 Lost Girls, documentary filmmaker Liz Garbus’ first narrative feature, is a compelling thriller based on the true story of Mari Gilbert’s (Amy Ryan) crusade to find her missing daughter Shannan who mysteriously disappeared after making a heart-wrenching 911 call for help.

After a botched investigation, the police accidentally discover a Long Island beach that’s been turned into a burial ground by a serial killer near the gated community where Mari’s daughter was last seen. When her daughter is not found among the victims, Mari launches her own courageous investigation.

The bodies expose the many unsolved cases of murdered prostitutes and sex workers who have been dumped and forgotten to time due to police indifference and corruption. As one apathetic detective complains, “Who spends this much time looking for a missing hooker?” Their negligence infuriates Mari who refuses to give up on her daughter’s case until she finds truth and justice.

Garbus expertly directs from a sharply written script by Michael Werwie based on investigative reporter Robert Kolker’s non-fiction bestseller, Lost Girls: An Unsolved American Mystery. She’s assembled a superb cast to bring the characters to life. Ryan is outstanding as a desperate, grieving, working class mother who is deeply flawed yet heroic. Mari is determined that Shannan and the other victims transcend the dark circumstances surrounding their tragic deaths and be remembered as someone’s daughter, sister, mother or friend. Gabriel Byrne is convincing as the senior detective with a long buried conscience, who is ordered to close the case quickly to avoid a scandal and protect his career. On the eve of his retirement, however, he relents and acquiesces to Mari’s impassioned plea to excavate a nearby marshland, aware it’s something he should have done years ago. His unexpected decision leads to a major break in the case.