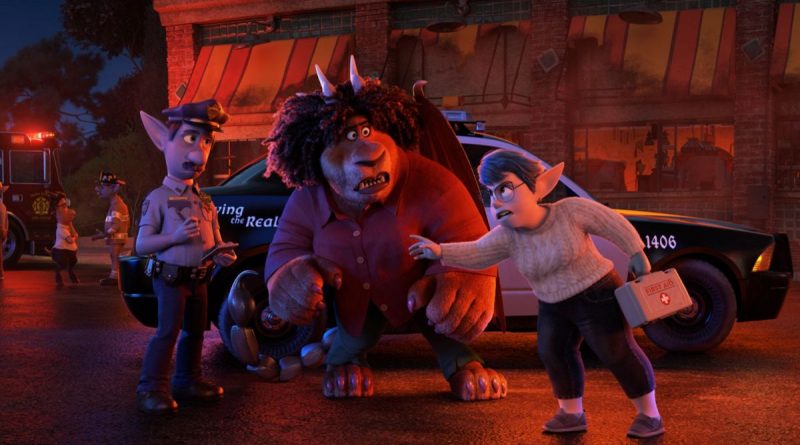 “Long ago, the world was full of wonder…” a narrator says.

Seeking to revive enchantment, this new, animated fantasy is set in suburban New Mushroomton, populated by mythical creatures: scavenging unicorns, punky motorcycle-riding pixies and pointy-eared elves – like angst-riddled Ian Lightfoot (voiced by Tom Holland), who yearns for a connection with his father who died of cancer before he was born.

On his 16th birthday, Ian’s mother Laurel (voiced by Julia Louis-Dreyfus) presents him with the wooden wizard’s staff topped by a sparkling Phoenix crystal that his long-deceased father bequeathed to him and his brash big brother Barley (voiced by Chris Pratt), who loves games like “Quests of Yore.”

Although they’re unfamiliar with the staff’s inherent magic, they try to conjure up Dad, if only for one day. But they’re only partially successful.

So they pile into Barley’s beat-up van, named Guinevere – with a winged Pegasus decal on its side – to embark on a ticking-clock mission to find another Phoenix gem to complete what they started.

Their chaotic adventure begins with a visit to a medieval tavern-turned-theme restaurant run by the Manticore (voiced by Octavia Spencer), who describes herself as “a winged lion scorpion lady.” From her, they acquire the map that leads them to a mysterious cavern with indicative runes, shifting stone floors and a deadly gelatinous cube.

While the brothers’ perseverance and courage are being tested, their road trip is monitored by worried Laurel and her boyfriend, Officer Colt Bronc (voiced by Mel Rodriguez), a centaur cop.

Because of the mourning death/loss theme and some violent scenes, it’s PG and recommended for children ages 8 and up.

On the Granger Movie Gauge of 1 to 10, Onward is a bittersweet, emotionally satisfying 7, combining silly slapstick with the supernatural.