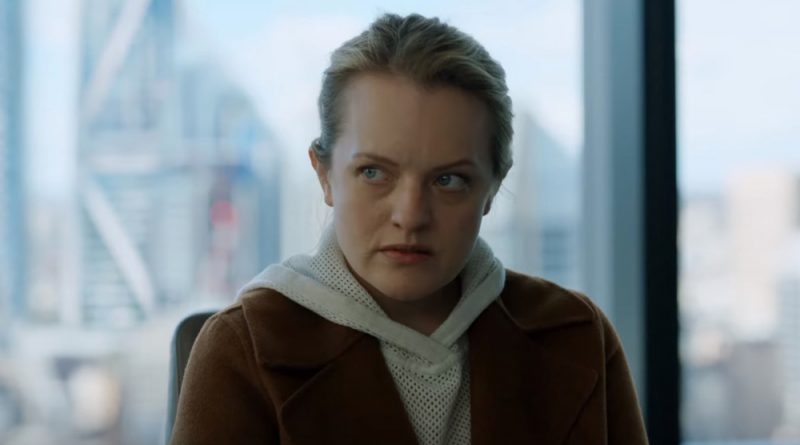 Based on how timely and relevant the themes are in the new film version of “The Invisible Man,” you’d never guess that H.G. Wells’ science fiction classic is more than 120 years old.

The often-adapted 1897 novel gets a smart, stylish and scary update from Australian writer-director Leigh Whannell, best known for his work on the “Saw” and “Insidious” franchises. He morphs the horror story into a suspenseful and thought-provoking psychological thriller powered by a fearless and relatable performance by Golden Globe winner Elisabeth Moss (“The Handmaid’s Tale,” “Us”).

We first meet Moss’ California architect Cecilia Kass at 3:42 a.m. as she attempts to sneak out of the gorgeously modern, tightly secured oceanside mansion she shares with her tech-mogul boyfriend Adrian Griffin (Oliver Jackson-Cohen) without waking him up. An exposed nerve of terror and anxiety, it’s clear that Moss’ Cecilia has been abused and controlled by this person, and despite her careful planning, she narrowly escapes with an assist from her tough-minded sister Emily (Harriet Dyer, the short-lived NBC series “The InBetween”).

Taking shelter in the home of her gallant childhood friend James (Aldis Hodge, building on the incredible momentum of his turn opposite Tulsa native Alfre Woodard in last year’s underseen “Clemency”), a cop and single father to whip-smart high school senior Sydney (Storm Reid, “A Wrinkle in Time”), an aspiring fashion designer, Cecilia remains so fearful of Adrian that she can still barely leave the house and walk to the mailbox weeks later.

She finally begins to relax when her ex’s spineless lawyer brother Tom (an appropriately oily Michael Dorman, “Pirates of the Caribbean: Dead Men Tell No Tales”) confirms that Adrian has committed suicide and left Cecilia a $5 million inheritance.

But her relief is short-lived, as Cecilia starts to get the frighteningly familiar sense that she is being watched inside James’ house. Then she begins to notice strange things happening: an briefly untended skillet suddenly bursts into flame, footprints appear out of nowhere, corners creak ominously. Her sister, James and Sydney all try to convince her that it’s her overactive imagination, and Cecilia’s insistence that Adrian was a “leader in the field of optics” and could make himself invisible if he wanted only convinces her small support system that she is paranoid and delusional.

As her unseen tormentor ratchets up the violence and the stakes – including a truly shocking restaurant scene and a series of well-choreographed fight sequences featuring the unseeable attacker – Cecilia finds herself totally alone and trying to figure out how to fight back.

Whannell gets decent mileage out of predictable scare tactics like doors that mysteriously drift open, breathy vapor that appears out of nowhere and rain outlining a shadowy figure. Although he lets the run time get a little long, Moss’ propulsive performance keeps driving the narrative relentlessly forward.

Like many of Blumhouse Productions’ low-budget horror films – “Sinister,” “Split” and even the 2018 “Halloween” reboot – “The Invisible Man” too often prioritizes slickness over plot soundness, with character psychology that sometimes gets wonky and a score (from Benjamin Wallfisch) that feels overly manipulative.

But “The Invisible Man” does compellingly and sympathetically depict the devastatingly all-consuming effects of domestic violence, while providing plenty of suspense and scares.