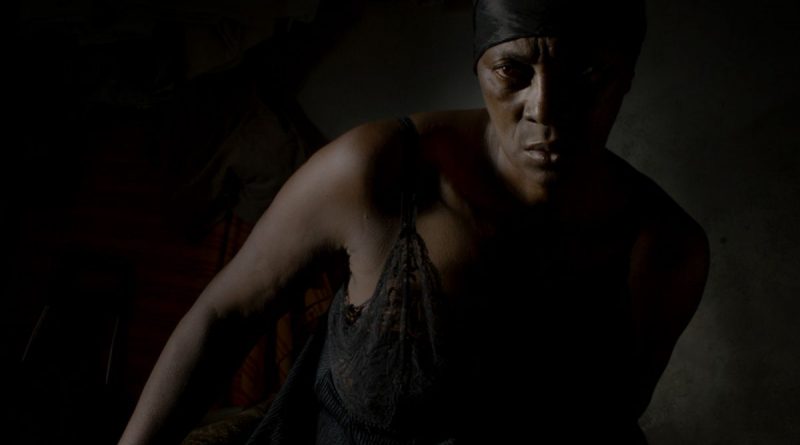 A mesmerizing, profoundly moving film, Vitalina Varela unfolds in slow motion over two hours, but what a two hours. While Hollywood feeds us everything we need to know in quick bursts of easily digested information, Portuguese director Pedro Costa understates and refrains from explicit excess. Instead he invites the viewer to enter and thoughtfully consider, the painful world he depicts.

Set in the Lisbon Fontainhas barrios, the first scene establishes the death of Joaquim de Brito Varela, bricklayer and electrician. His widow Vitalina Varela, hence the film’s title, arrives from Cape Verde, too late for her husband’s burial, as she learns on the tarmac. Joaquim abandoned Vitalina four decades ago, pursuing his dream and chasing women. As she inhabits his shabby apartment in the subterranean Cova da Moura slum, she mourns, interacting with his colleagues (often mere shadows) and the local priest, the pastor of an empty church from whom she begs a mass.

Costa co-wrote the film with Vitalina Varela, a nonprofessional actor anchoring this autobiographical persona. Few details are spelled out; for the first ten minutes, only two words are spoken. These individuals’ graves are mere numbers. Yet Vitalina eloquently communicates a world of suffering and dispossession, expressing thoughts out loud to herself and, infrequently, to others. Throughout, tableaus convey misery and lack of agency, indicting religion, sexism and racism.

Cinematographer Leonardo Simões’ extraordinary, expressionistic lighting is reminiscent of dramatic Vermeer, Goya, or Raphael paintings as well as photographs of Dorothea Lange, Walker Evans, and Gordon Parks. In doorways and windows, often with bars, Vitalina is framed as a portrait, sculpted by light. She reaches out of the darkness of her life, a dignified monument to the suffering that accompanies powerless poverty, the legacy of colonialism. Scenes with sunlight late in the film are shocking by contrast to the darkness throughout. In Portuguese with English subtitles.