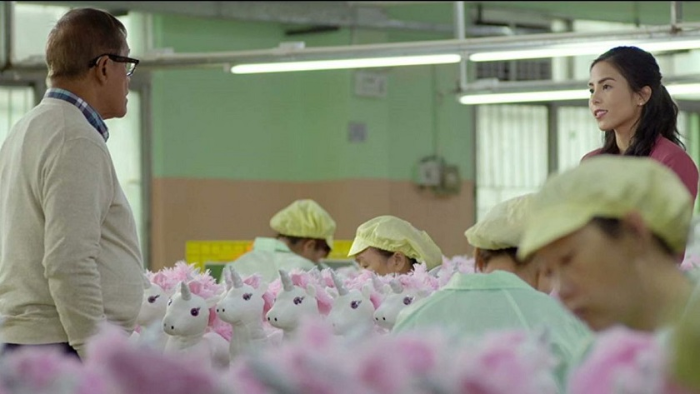 Following the successful release of Crazy Rich Asians and The Farewell, writer/director Emily Ting’s Go Back to China is a coming of age story that deals in an entertaining, upbeat way with the issues faced by Chinese Americans caught in the clash between the American way of life and traditional Chinese culture, between habits picked up in an adopted homeland and cultural roots planted on ancestral turf.

The narrative centers on Sasha (Anna Akana), a Chinese American princess who recently graduated from fashion school and hasn’t yet found a job. Not to worry, she’s the spoiled daughter of a wealthy Chinese businessman who presides over the family business, a Shenchen factory that produces plush children’s toys for worldwide distribution. Dad, a blatant womanizer who has had several wives and numerous mistresses, has been completely absent from Sasha’s life, except as a remote source of money.

But, the patriarch is apparently tired of Sasha’s profligate spending on Birkin bags and Jimmy Choos. He freezes her bank accounts and he cuts off her credit, demanding that she come to China to work at the factory and meet her family obligations. Sasha won’t have it. But, when her rent check bounces, she capitulates, planning to do a stint at the factory and convince her father to release her trust fund, then return to her expensive life style in the States.

Sasha isn’t prepared for what she finds in China — especially for her father’s unfettered rudeness and cruelty to workers, and his paying them slave wages. Nor is she prepared for the challenges she faces in dealing with the rest of her family, especially her half-sister Carol (Lynn Chen), who is second in command at the factory and is as demanding and heartless a boss as her father, but feels trapped in a job she never wanted. . And then there are Dad’s two youngest daughters, the ill-behaved tweens, Christian and Dior, who are impossibly spoiled brats. And, the icing on the cake is Dad’s barely-legal-age-mistress (Kendy Cheung) who “takes care of him.” With emotions and finances at stake, it’s a nasty dysfunctional family situation — one that has plot twist potential aplenty.

And the plot takes full advantage of all possible twists — most of which we’ve seen before in other stories. The family business goes into crisis when toy buyers pass on factory’s current product line because the designs are stale. Stepping up to try to save the day, Sasha wangles a research trip to nearby Hong Kong with the factory’s two top designers in tow to see what’s trendy in stores, and returns inspired to design a whole new collection of stuffed animals. Big success and some never-before kudos from Dad. But the new product must then be recalled because kids are swallowing sequins that fall off the plush. Threats of law suits that will put the biz out of business. Sasha falls into disgrace, but finds a way out — thanks to her unstoppable American can-do spirit.

Akana is fully believable as the ‘Crazy Rich Asian-American’ Los Angeles party girl whose life is on the road to transformation. (Richard Ng) is convincingly odious as the profligate father who is really good at having kids but really bad at raising them. And the ensemble of support players is quite engaging.

Shenzhen and Hong Kong are also characters in this narrative. Shenzhen is real world, working class, low wages, harsh reality. In contrast, Hong Kong offers glossy abundance and high style living that Sasha’s used to. The clash of cultures is also shown in the scenic shift from Shenzhen to Hong Kong and back.

Audience-wise, Go Back to China skews to a younger crowd. Mature viewers could easily tire of the overly familiar tropes and trappings of the rather familiar story and theme. Although the narrative is specific to Chinese-American cultural concerns, it could be adapted to fit any ethnic point of view. From a woman’s perspective, the biggest takeaway seems to be that men have no idea of the damage they foster – especially to their daughters – when they discard one family for another in serial relationships. Money allows for practical payoffs, but it’s not the cure or the fix.

Bottom line: Go Back to China is a frothy, watchable coming of age film for younger viewers.