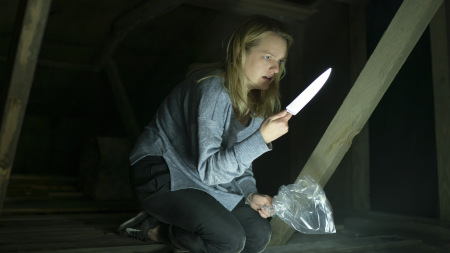 A terrific piece of regional filmmaking, Blow the Man Down takes the Minnesota-set Fargo and shifts it to fictional Easter Cove, a fishing village in Maine. Beyond the blackly comic tone, the amusing accents and the small town quirky characters and mindset, the film, written and directed by Bridget Savage Cole and Danielle Krudy, is a subtle female revenge and empowerment story.

It also gives a delicious role, as modern day whorehouse madam Enid Devlin, to the always great Margo Martindale, soon to be seen as Bella Abzug in the upcoming Mrs. America. Martindale makes the most of her role, as does June Squibb, who came to the happy attention of most audiences in Alexander Payne’s Nebraska, who has the juicy supporting part of Susie Gallagher.

They are part of a group of older women, mostly Irish, that includes wonderful performances by Annette O’Toole and Marceline Hugot, who long ago took charge of their port town in Maine. With the backing of these women friends, Enid opened a brothel in a rambling, remote farmhouse. But times have changed and grown more sinister. Enid has partnered with a shady fisherman (Ebon Moss-Bachrach) and now a troubled young woman has turned up dead. That grisly discovery has huge implications for sisters Priscilla and Mary Beth Connolly (Sophie Lowe and Morgan Saylor) who are themselves responsible for another murder and cover up.

The town’s older women emerge as a formidable gang who once took control and mobilize to do so again. Squibb is delightful as a deceptively cuddly grandma who gets information while doling out freshly baked pie. Martindale’s Enid is rich creation who is still recognizable; she makes enough dough to afford a mink coat but is filled with scorn as she schools Mary Beth and Priscilla about what the town was once like for women like Enid and the girls’ recently deceased mother.

Shot in Maine which lends great authenticity, Blow the Man Down is framed by grizzled fishermen gutting and cleaning their daily catch while singing the title sea shanty. The tune turns up later in a different form, sung by the elder women of the village. Like the rest of the film, it’s a perfect note of strange beauty in an atmospheric crime thriller that mixes a Coen brothers grimness with a genuine feel for small town life and characters, particularly the women, who are natural and believable, not condescendingly “quirky.” This local matriarchy knows how to take charge, and how to keep the town’s secrets.