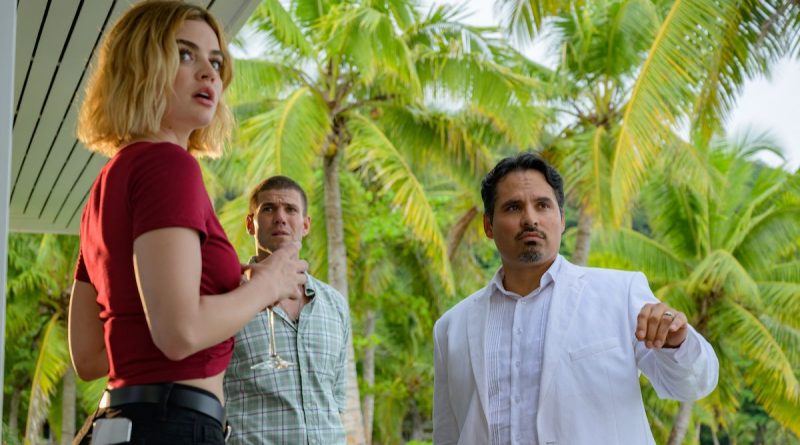 Instead of paying $50,000 for the privilege of visiting this paradise, they’re contest-winners whom Mr. Roarke cautions, “Fantasies rarely play out as you would expect.”

Lurking in the background as these grisly, nightmarish episodes unfold, breaking every law or nature and reason, there’s Damon (Michael Rooker), a machete-wielding private investigator who’s determined to discover the true intentions behind Fantasy Island.

Directed by Jeff Wadow (Truth or Dare), who co-scripted with Chris Roach and Jillian Jacobs, the scenario utilizes far too many pop culture references (like Game of Thrones and Call of Duty) as it skips from one character’s campy fantasy to another’s, resulting in an inevitable lack of tension and any emotional involvement on the part of the viewer.

On TV, Ricardo Montalban was enigmatic Mr. Rourke with Herve Villechaize as his diminutive assistant Tattoo, and cinematographer Toby Oliver sets up several shots that reference the original series.

FYI: Made on a strict budget of $7 million, most of the filming took place on Fiji’s Navodo Bay. And the closing scenes set the stage for sequels.

On the Granger Movie Gauge of 1 to 10, Blumhouse’s Fantasy Island is a feverishly fragmented 4, once again relying on sinister style over substance