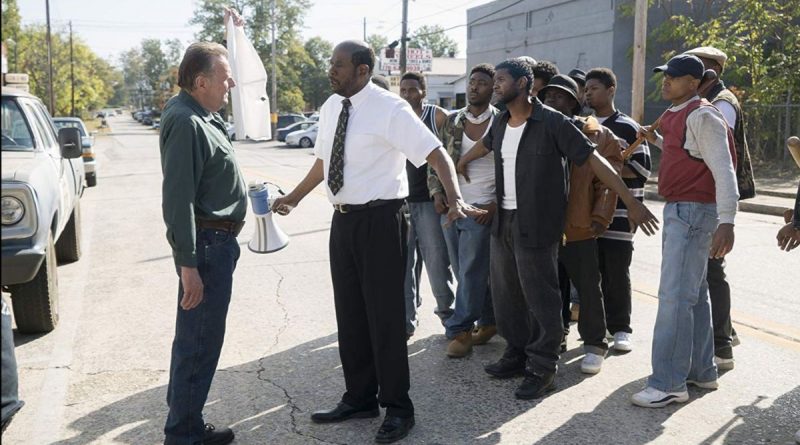 One of the many aspects of “Burden” worthy of attention is that it’s set in 1996. Writer/Director Andrew Heckler based the script on a report in real life about Klu Klux Klansmen. Not in the 19th century or even in the 1950s when all those Confederate statues were erected to intimidate African-Americans. 1996.

In that year, a museum in a former movie theater in Laurens, South Carolina, opened to celebrate the Klan. One of the town’s black citizens, the Rev. Kennedy, opposed such an atrocity, opposed it loudly with a bullhorn and opposed it with pickets and parades of his supporters. He lives his sermon that perfect love drives out fear.

The museum’s muse is one Tom Griffin. His minions found their despicable leader in this hate-filled man. But the aptly surnamed Mike Burden had found a father in Griffin and a family with him and his wife. He followed the leader without thinking.

And then he found a good woman, Judy, a single mother with a sweet boy. She dates Mike, that is, until she finds out he is a Klansman. Then, no sirree, Bob, she will not have him in her house. He chooses her. And loses his job and housing, which were connected to Griffin.

The Rev. Kennedy takes them in. He feels sorry for Mike Burden, recognizing that he is “white and poor and uneducated and raised with hate.” Forest Whitaker keeps the pastor in taut reins, making him believable, but Tom Wilkinson also makes the head Klansman very believable, too, in a challenging role. Andrea Riseborough from the brilliant Nocturnal Animals, adds dimension to Judy.

The actor to applaud in Burden is Garrett Hedlund, also seen in Tron and Mudbound. As Mike, Hedlund never looks up, he speaks sparely, he changes. Hedlund looks ravaged, like the real Mike Burden, who appears with the real Judy before the closing credits along with director Andrew Heckler’s appeal for rehabbing the Klansmen’s closed museum — for goodness’ sake.