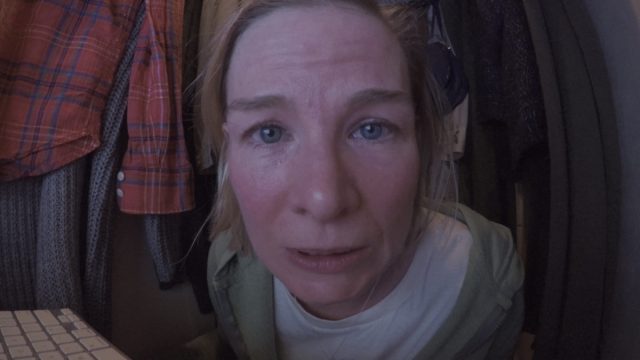 M.O.M.: Mothers of Monsters is a cautionary tale about family communication.

Writer/director Tucia Lyman’s background as a show-runner and director of fact-based TV dramas seems like perfect practice leading up to M.O.M: Mothers of Monsters, a dramatic thriller that is both a bit ridiculous and yet is peppered with enough pulled-from-the-headlines moments that it feels all too real.

Melinda Page Hamilton stars as Abbey, a single mother of a troubled teenage boy named Jacob (Bailey Edwards). On the surface, Jacob seems well adjusted; he has friends, he does well at school, his grandmother thinks the world of him, most of the teachers have good things to say. But life at home with Abbey and Jacob is far from idyllic. Fueled by night-mare stories of parents who had no idea that their children were plotting mass murder, Abbey sets ups cameras throughout the house and begins spying on her son in hopes of capturing something that may be helpful in saving lives.

At first the surveillance seems innocuous and it just seems that Abbey is an overprotective mother that may be reading too much into it when her son acts out a little but doesn’t really seem to be violent. But the more footage we see, the more unhinged that both Abbey and Jacob appear and soon, it’s not clear who is the truly troubled one.

Found-footage has been used to tell many stories in a wide range of genres and with an assortment of themes and while it remains a cheap way to capture an idea, the story still needs to be engaging in order for the project to work and in the case of M.O.M., the approach works well.

Lyman plays her cards strategically and by the movie’s second act, it’s not clear who captured the video we are watching and more importantly, to what end. It’s clear from early-on that Jacob knows something is going on but Lyman doesn’t reveal just how much he knows until very late in the story which radically changes the interpretation of some of the footage.

I found myself constantly trying to figure out who was in control and while it ultimately doesn’t matter, it feels important in the moment. For most of the movie’s running time it also wasn’t clear what Jacob’s intentions were which didn’t help ease any of the tension that begins to build from the first interactions between Abbey and her son.

M.O.M. is a cautionary tale about a mother who wants to do right by her son and by society by trying to determine if her baby is a monster. It’s also a really sad and far too real observation of a family in crisis and how lack of communication can escalate a misunderstanding into something far bigger than it is.

M.O.M. shines a spotlight on how imperative is for parents to talk to their kids. Now if only the masses would listen.