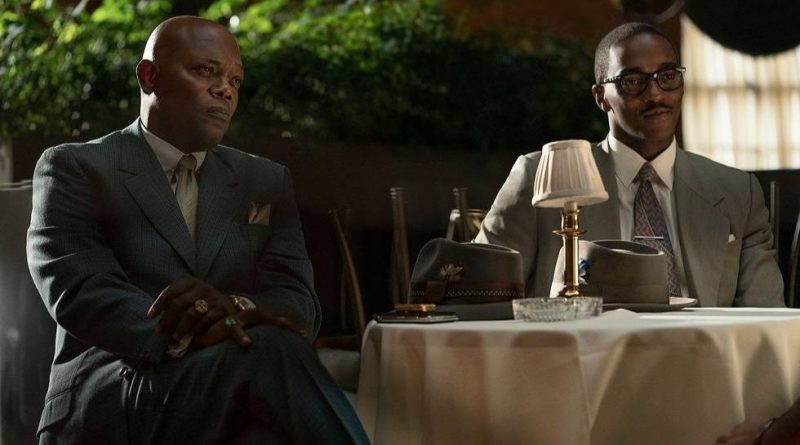 As The Banker opens, Bernard Garrett faces questioning at a1965 U.S. Senate Committee on Government Operations hearing, ostensibly investigating rules and regulations regarding the “character, experience, and integrity” of people who acquire FDIC banks. This smokescreen fails to hide the real agenda: determining how two black men acquired banks and property in 1950s America, and to prevent it happening again.

This Senator McClellan hearing bookends the story, inspired by true events, of Bernard Garrett and Joe Morris who, at their height, owned one hundred seventy-seven buildings, many in previously white-only communities in California and, eventually, Texas. After introducing the context, the narrative jumps to 1939 Willis, Texas. Bernard is a shoeshine boy with a flair for math and, as he’s repeatedly told by his future partner Joe Morris, intelligence and ambition. Intensely aware of society’s prevalent racism, Garrett and Morris create a white face man, Matt Steiner, whom, Pygmalion like, they coach and guide through brilliant strategies.

Their fascinating, astonishing story unfolds over the next two hours with suspenseful developments in director George Nolfi’s and Niceole R. Levy’s witty, humorous screenplay, based on a story by Brad Kane, David Lewis Smith, and Stan Younger. Blatant racism is, refreshingly, never sugar coated, always directly addressed, leading to Garrett’s question to the Senate. “Why is it so important to you to exclude an entire race of people from the American dream?”

Shooting on Kodak film, cinematographer Charlotte Bruus Christensen’s compositions and lighting bring this 1950s world to vibrant life. Above all, The Banker comes sensationally alive through the interplay of Anthony Mackie as Garrett and Samuel L. Jackson as Morris. With complementary personalities, they have controlled energy and perfect timing, plus amazing verbal and nonverbal nuances, in roles that showcase their expertise. Also excellent are Nicholas Hoult as Steiner and Nia Long as Eunice Garrett, a voice of reason and conscience.

It must be noted that Apple postponed the December 2019 release because of Garrett’s daughter’s law suit for sexual abuse against her half-brother, a producer who has since withdrawn his credit. I’m glad The Banker has received its overdue release.