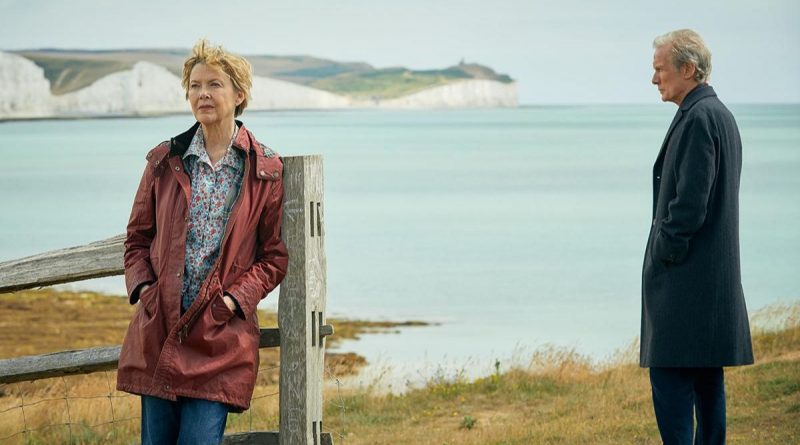 Hope Gap burrows into the dissolution of a 29-year marriage

Among the most popular and praised films from last year, Marriage Story dramatizes, often painfully, a young couple’s separation and alienation. As if adding a postscript, Hope Gap focuses even more intensely on the dissolution of a twenty-nine year marriage. However, instead of giving equal weight to wife Grace and husband Edward, the profile stacks the deck against Grace.

To be fair, Edward is no saint, having engaged in a year-long affair. Still, that doesn’t get more than an early nod. Instead, sixty-year-old Grace’s demanding, unyielding personality takes center stage. In an early scene, one of her physically abusive outbursts goes over the line, making it impossible to excuse the action. Grace’s love of poetry does establish some minimal sensitivity for her, and the chance to introduce a lot of metaphors, including the title. Meantime, Edward, who broods despondently, embodies the clichéd, emotionally detached husband. Given their mismatched personalities, it’s most surprising, and unfortunate, that their marriage lasted twenty-nine years.

Both parents trap adult son Jamie in their drama, though he apparently enjoys little life beyond their problems. In a published letter, writer/director William Nicholson describes Jamie as his surrogate, expressing the trauma while in his twenties when his parents’ marriage of thirty-three-years ended. To his credit, Nicholson captures quite unambiguously the psychological and emotional pain. Moreover, his unvarnished depiction of the situation will strike many as absolutely honest and recognizable, despite a somewhat plodding pace.

In a story focused on three people, the actors make or break the film. Here Annette Bening and Bill Nighy as husband and wife, and Josh O’Connor as their son Jamie, give solid, even superb, performances. They convey a depth to their flawed, unappealing characters.

Hope Gap is set and beautifully shot by Anna Valdez-Hanks in Seaford, England. Pia Di Ciaula’s editing knows exactly how long interaction should run. The main problem remains: who wants to be around this couple, with little relief beyond a church scene and some heavy-handed teaching? It’s regrettable they didn’t get counseling and/or parted much sooner.