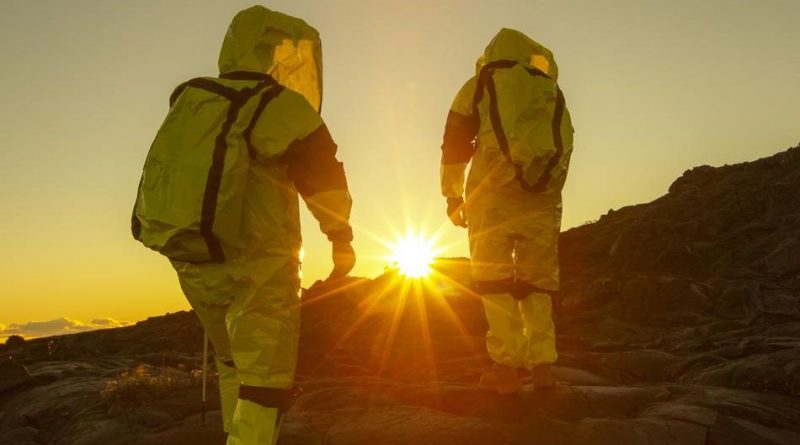 Hawaii’s Mauna Loa volcano may seem like an unlikely setting for space exploration, but for a group of intrepid scientists and would-be astronauts, it becomes exactly that in this NASA experiment captured by filmmakers Lauren DeFilippo and Katherine Gorringe in this fascinating documentary.

The purpose of the year-long exercise, the fourth NASA Hi-SEAS mission and the longest, is to gauge how humans fare while cooped up together for 365 days in a geodesic dome masquerading as a spaceship. At the same time, they conduct experiments and occasionally venturing out of the “airlock” fully encased in space suits, roaming the lava strewn grounds as if doing a study on the Red Planet’s surface. Over the course of the year, they fill out thousands of surveys to assess the success (or failure) of the endeavor.

Shot by the astronauts themselves, mostly cinema vérité, but with the occasional interview thrown in for good measure, Red Heaven captures the initial enthusiasm of everyone involved. As individuals, they try to maintain that. But the documentary demonstrates exactly how hard it is to maintain cohesion in a group as inevitably personalities clash and friction arise.

There are other pressures on them. They can only communicate with the outside world via emails that are on a delay. One crew member complains that while he sends long missives to friends and family, they write back maybe a paragraph if at all. One of the crew members, Cyprien Versaux, is left in a worried panic when he gets vague news of the 2015 terrorist attack in his hometown Paris and must wait to discover not only the details of event but also whether any of his friends or family are among the victims. Another crew member, Dr. Sheyna Gifford, counts the days until she can see her husband again.

The most intriguing thing about Red Heaven is less the purpose of the experiment than its study of human nature. Everyone on board – picked in part for how they might handle stress – is an adult, so open hostilities never break out. But snark is expressed during the interviews and the film documents the overall mood growing darker – until it isn’t. A broken water pump is not exactly good news – and a little terrifying if one calculates something like this happening in the middle of an actual space mission – but when the group has to come together to fix the problem, suddenly they are all friends again.

A couple of these would-be space explorers would love to be real NASA astronauts. Another, a graduate architecture student, wants to design space vehicles. Others have their own reasons for accepting the HI-SEAS challenge. What unites them is the necessity of exploration and eventual colonization of Mars. As one of them puts it, if humanity can no longer thrive on Earth, then it must thrive elsewhere for all of our achievements to have been not for naught.

One of those achievements is this HI-SEAS experiment, a baby step in the ongoing project to conquer space, but bigger leap into the understanding of human behavior. Red Planet’s achievement is to compact those social interactions into a captivating and insightful 87-minute film.