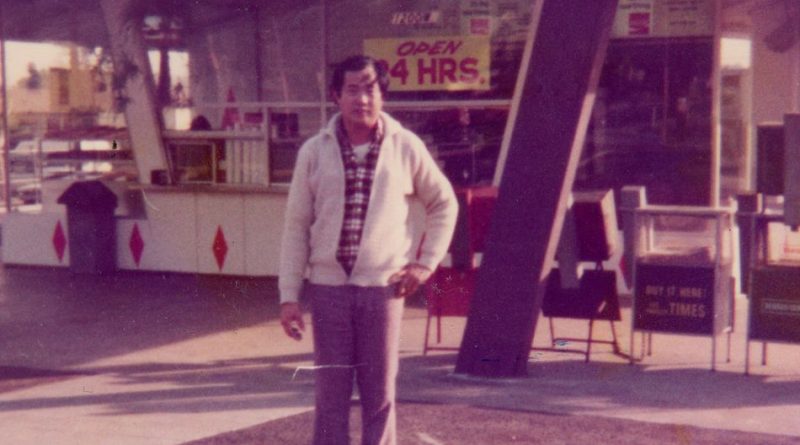 To illustrate one of the savvy moves made by Ted Ngoy, The Donut King’s titular purveyor of everyone’s favourite circular pastries, filmmaker Alice Gu rolls out a tried-and-tested documentary tactic. Partway through her first-time feature-length film, she calls upon a range of beloved pop culture sources, inserting doughnut-centric clips from Parks and Recreation, The Simpsons, Pulp Fiction and Twin Peaks. Some have become more widely associated with the item in question than others, but they all paint a strong picture of the doughnut’s pervasive popularity. The reason for these snippets of footage is actually to show how Ngoy’s decision to have his boxes printed in pink became the industry standard — as immortalised on-screen many a time — however they also act as a reminder that doughnuts have become baked into the fabric of western society.

To Ngoy, when first discovered doughnuts in 1975, they weren’t simply a sweet treat adored by anyone and everyone. An ex-Cambodian soldier-turned-refugee when the Khmer Rouge won the Cambodian Civil War, he was trying to make a new life with his family in Tustin, California when he was drawn into a local doughnut shop by the smell. And by his own description, he fell in love with not just the scent, but the taste of the desserts that instantly reminded him of Cambodian dish nom kong. Obviously The Donut King wouldn’t exist if that was the end of Ngoy’s story — and Gu benefits from quite the tale to tell.

For the unacquainted, the details are best discovered by watching. All bases are covered: the fairytale rise from poverty to riches, the dark past, the generous boost to a growing community, the lasting impact and the sharp reminder that success stories don’t always run smoothly. It’s the quintessential example of exactly what Ngoy was chasing — the American Dream, of course — and it’s filled with more real-life twists and turns than a soap opera.

Gu smartly realises that, although Cambodian mom and pop doughnut stores are littered throughout both southern and northern California, most of her audience will be new to the minutiae behind them. Accordingly, her documentary proves both affectionate and insightful on several levels. It pays tribute to a pioneer without overlooking all sides of his story. It delves into the reverence afforded to the humble doughnut while charting how Ngoy played a part in that status. And, likely to the surprise of most watching, it explores how his instant fondness helped completely change the lives of many of his fellow Cambodian Americans fleeing genocide, while also pondering the importance of a nation such as the US aiding refugees in need — and the contributions they make to society in return.

More than just a movie about doughnuts (with gleaming shots of round desserts splashed throughout the film with frequency, like pastry porn) or about a self-made man who earned a fortune making them, The Donut King serves up a weighty musing on a variety of facets of the immigrant experience. While framed around one foodstuff and one person, the devotion that Ngoy and the many other incoming refugees he sponsored and taught the trade all gave to their businesses has wide-reaching parallels, as found in the plethora of similar small, family-run eateries and food-focused businesses. In fact, they’re so commonplace, spread across so many cuisines and dishes, and shared by so many cultures, that the hard work behind them — and what they mean to those toiling day and night — is hardly offered a second thought by most customers.

Given the accessible nature of her topic, Gu keeps The Donut King’s tone and approach largely upbeat, although admitted glazed doughnut fiend Ngoy does walk down dark paths. Indeed, when animated interludes help flesh out his backstory and break up the talking heads — Ngoy, as well as his family, friends and colleagues, plus other doughnut industry experts — they’re tasked with conveying difficult matters rather perking up the inherently appealing subject that is doughnuts. Some stock footage also deployed to re-enact Ngoy’s tale is far less convincing; however it’s that tale itself that shines through.

Specific in its detail universal and relatable in its scope — and both timely and relevant in examining the impact of refugees and immigrants in US life — The Donut King is equally thoughtful and celebratory. It’ll also help sell many a doughnut, not that they need the assistance.