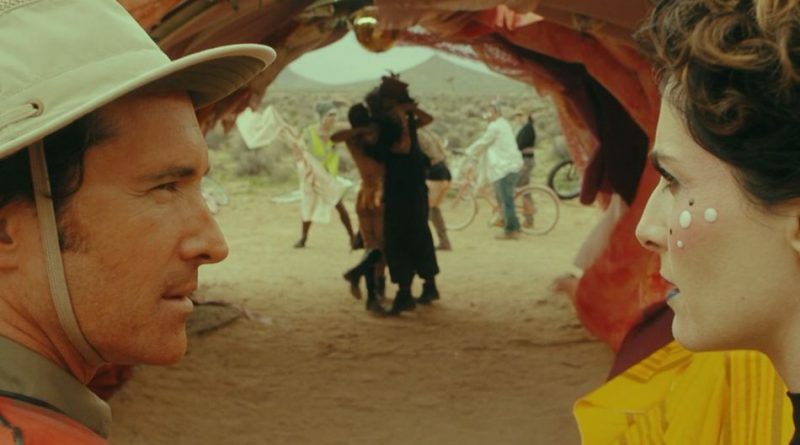 From the outset, Everyone Together’s preliminary scene draws you in—the outlandish costuming, the unique setting, and the deliberate overacting by its main stars—all establish an off-balanced tone, in this pilot for a proposed episodic series, centering on a dysfunctional family’s search for love. Screenwriter Kelsey Ledgin’s main intention is to keep viewers from regaining that balance, as the characters’ outrageous behavior continues at an unsteady gait.

Lulu (Jessica Kaye) feels an obligation to support her younger sister Fern (Emily Ruth James) by attending Fern’s week-long wedding celebration. Lulu’s annoyance is made clear as Eli (Iman Nazemzadeh) the groom is her ex-boyfriend’s younger brother, Daniel, (Reza Sixo Safai). Martin (Steven Klein), the girls’ brother, has his own contentious issues surrounding the celebration as his estranged wife Caroline (Samantha Sloyan) will be attending. Relationships rife for creating emotional chaos at a family gathering of any sort.

Once the festivities are underway, we meet the effervescent Gigi, the matriarch of the family (portrayed remarkably by Gigi Bermingham) and her husband, Brian, the family patriarch (John Apicella) whose performance as the plot dictates is both comical and somber. The familial dysfunction originates with Gigi and Brian, as they both offer reflections, redemption, and gratitude in their highly personal wedding toast to their stunned family and guests.

Cleverly written, offering bold choices in directing by Lauren Ludwig, such as the opening scene as well as the father and son scenes between Martin and his teen son, Ethan (portrayed impressively by Matthew Garbacz).

As a potential series, Everyone Together presents intriguing characters that audiences would enjoy observing throughout their growth and development as new situations are presented. The strong cast feels natural and relaxed, yet when it comes to battle, it’s ‘no holds barred.’

The adult themes of sex, betrayal, and jealousy, are explored along with the guiding moral compass of Caroline, as she pleads for her son’s emotional well-being with an immature Martin. Lulu, the wildcard, offers a plethora of entertaining situations, as she’s apt to try most anything to find true love. Audiences will eagerly look ahead to her future escapades.

The entertaining, comical, and realistic script aided by a strong, seasoned cast warrant the green light for more episodes of Everyone Together.