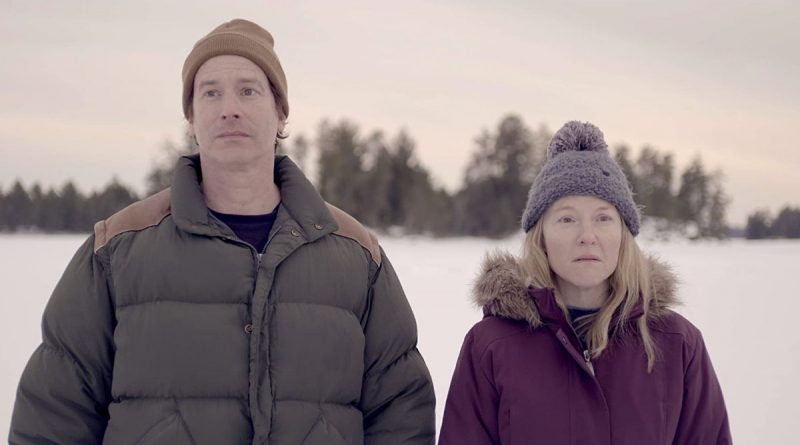 Right before I started watching the new indie release, International Falls, I had noted to myself that I wanted to watch a documentary called Misery Loves Comedy. I don’t know much about that documentary, which features interviews with dozens of comics, but it appears to speak to the connection between comedy and depression. What director Amber McGinnis and screenwriter Thomas Ward’s film International Falls does, is authentically capture the many ways that stand-up comedy, and comedy in film, is drawn from the struggles of real life.

International Falls is named for the frigid Minnesota town in which tragically awful comic Tim (Rob Huebel) finds himself, checking into the local motel, where wanna-be comedian Dee (Rachael Harris) is a desk clerk. When she comes to his performance and approaches him afterwards, she instigates an awkward relationship that builds through sharing their individual miseries, and their willingness to open up to each other. Harris and Huebel are wonderful together, and it’s a joy to see both actors, often relegated to co-starring status, show their acting chops, and carry a film as leads.

There are times in all of our lives, at least for those of us who are lucky, when we have interactions with strangers that prove to be incredibly deep and life-changing. International Falls will remind you of at least one of those times, from your own life, that may have altered the trajectory of your future in a powerful and very important way.

It has definitely resonated with a number of viewers. When it was performed as a play in 2012 at the Out of the Loop Fringe Festival, it was voted “best of fest”. The film version has won prizes at the Seattle, Fargo, and Ashland Film Festivals, and has been nominated in others, including the Dallas, and Atlanta film fests. I’ve read Ward’s blog, and he seems to have drawn from some aspects of his own life. He isn’t a comedian, but he is an actor and writer, and those jobs can be very disheartening and soul-crushing, especially for anyone prone to depression.

I asked Ward about his play and screenplay. He spoke about “therapy theater”, an expression he coined, which is exactly what it sounds like. He explained, “My writing leans more towards what I’m dealing with emotionally or mentally than what’s going on in the news. International Falls started for me personally as a way to deal with some depression that I was coming out of and that had been diagnosed for the first time. That was when it was a play in 2011. I thought it would be interesting to juxtapose that depression with a character who was a stand up comic. So for me personally International Falls was very therapeutic, a catharsis. I hope it is for others.”

You might, like I did, see the ending telegraphed fairly early on. That doesn’t remotely matter, or reduce the connection between the viewer and the film and its characters. If the last 10 minutes doesn’t make you tear up, you might be a monster. I know it wrecked me.

There is a gentleness and a frankness to the script, that speaks to an understanding of the struggle for joy to which we can all relate. We might not all be comedians, or feel an urgent lack of worthiness or capability, but we all know people who struggle and search for connection. This film will feed that desire, break your heart, and bring you hope of resilience, all within an hour and a half.

And, Amber McGuinnis’ talks Obstacles and Opportunities on AWFJ.org’s THE FEMALE GAZE blog.