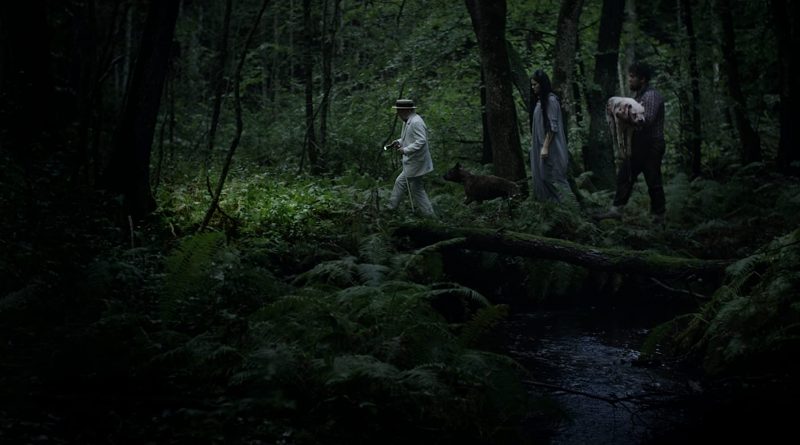 Thirty-something couple Elin and Tobias (Ylva Gallon, Leif Edlund Johansson), on vacation with their daughter, Maja (Katerina Jacobson), are eating lunch at an outdoor café, Maya, who’s about to turn eight, is wearing bunny make-up. She’s clearly the true fan, evinced by her fluffy pink ears. Maybe there’s a Midsummer festival going on—they feature costumes, face-paint and traditional rituals; maja is Swedish for maypole—or maybe not, but everyone’s having a lovely time until Elin, her face an alarming shade of scarlet, winds up vomiting in the ladies’ room and the whole family is evacuated by helicopter to the nearest hospital.

Probably an allergy to the mussel-topped pizza (ugh) is the verdict, but they’re kept in the hospital overnight. Tobias manages to rustle up a birthday (cup)cake and candle for Maja, but the couple’s plan to surprise her by singing her awake turns into a nightmare: Their baby isn’t sleeping in…she’s dead.

Three years later, Elin and Tobias’ marriage is hanging by a fraying thread and they’re hoping a camping trip will help them heal. No such luck: The road trip is fraught and their campsite is somewhere in hell-land, where three interlopers brutalize them…over and over and over.

Comparing Koko-di Koko-da to Groundhog Day is the go-to and yes, the film is indeed about living one dreadful day on endless repeat. No matter how hard Tobias—who’s fated to spend most of his screen time in tighty-whities, since the badness commences in the middle of the night, when he’s asleep the tent and Elin ventures outside to pee in the woods— tries, he can’t make things come out right. Their tormentors—Mog, an older man dressed like a carnival barker; Sampo, a silent muscleman in lumberjack gear; and Cherry, an alarmingly tall woman with long black hair (Peter Belli, Hobad Khatchadorian, Brandy Litmanen, respectively)—just keep returning, as do a trio of animals: two dogs (one living, the other dead) and a fluffy white cat.

But, as referred to above, the more apt comparison might be made with co-writer and director Oliver Stone’s 1974 Seizure—which predates by decades such better known tormented-family films as Funny Games (1997) and The Strangers (2008)—in which a novelist and his dysfunctional family are similarly tormented by a muscular giant, a black-haired woman and a dwarf (Henry Judd Baker, Martine Beswick, Hervé Villechaize, respectively). Seizure’s conclusion suggests that it. too, is going to start up again at the beginning.

That said, writer/producer/director Johannes Nyholm’s approach is far more subtle and emotionally engaging. Koko-di Koko-da (whose title derives from the name of a French lullaby whose lyrics, like those of many songs for small children, repeat endlessly) benefits enormously from the presence of animated sequences and informed equally by traditional Indonesian shadow-puppetry and brightly-colored children’s art. They beautifully stylize Elin and Tobias’ ordeal… not their woodland nightmare, but the root source of their true anguish: Maja’s death and their inability to move past grief and guilt and their ongoing search for someone to blame, to the tear-stained acceptance that allows people to extricate themselves from the tar pit of grief.