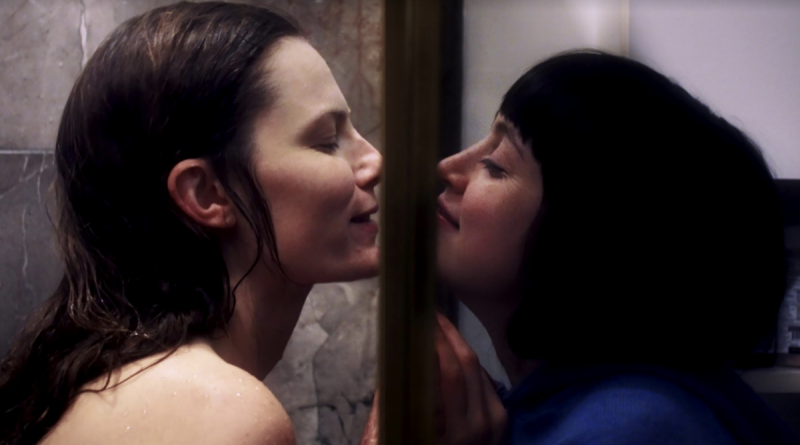 Perched between a rom-com and a romance-fuelled psychological thriller — both of the offbeat, indie, gleefully eccentric variety — Caleb Michael Johnson’s debut feature The Carnivores sinks its teeth into the all-consuming nature of love.

Austin bank teller Alice (Tallie Medel) loves US postal worker Bret (Lindsay Burdge) and vice versa, although the former isn’t being given the opportunities she’d like to show it in an intimate way. Bret loves her dog Harvie, too, whose protracted illness and the costly medical intervention needed to keep him alive are casting a shadow over the couple’s affectionate but hardly idyllic long-term relationship.

Bedroom woes, financial issues, petty jealousies over attention being sent in another direction — they’re all boilerplate bumps on the road to amorous bliss. That said, The Carnivores never feels as if it’s simply painting by numbers within its confidently moody low-fi packaging.

Co-writing with fellow feature first-timer Jeff Bay Smith, Johnson finds a groove that both bears signs of familiarity and settles into its own niche. Indeed, it isn’t the nuts-and-bolts inclusions of many a standard romantic comedy, drama and thriller that appears to drive the film, but rather the descent into mental and emotional turmoil of David Lynch’s Eraserhead, as well as the transformative consumptive urges of Julia Ducournau’s coming-of-age cannibalism fantasy Raw.

Like the protagonist of the latter feature, Alice and Bret are vegetarians. In Alice’s case, she’s also having such strong fleshy cravings that she stares at the meat section of the supermarket like a woman possessed. And, in her own way, she’s awakening to other desires she didn’t know she had. The fact that Alice sleepwalks means that she can’t completely trust either what she’s doing herself or what’s going on around her; however her devotion for Bret only grows in intensity. But Bret’s focus is firmly on Harvie, who’s fond of running off — Bret hates keeping him on a leash — including, one day, permanently.

Atmospheric not quite to the point of abstraction, but bordering on it, The Carnivores smartly and successfully steeps viewers in Alice and Bret’s mindsets — which aren’t as far apart as they might seem. The pair isn’t getting cosy between the sheets, but they do share an amplified sense of distress and unease as the thing they each want the most wanders further away. In Bret’s case, she chases Harvie, plastering flyers around town and hunting down every lead. In Alice’s, she tries to fight off her new hunger for meat, endeavours to stave off her somnambulism and wrestles with her suspected culpability in Harvie’s absence, all while desperately attempting to get Bret to connect.

Johnson doesn’t completely calibrate The Carnivores to disquieting perfection. His film both looks and feels as though it could’ve been wholly dreamed up by Alice in her sleepwalking state — with key help from cinematographer Adam J. Minnick — but sometimes if also seems forceful rather than finessed. Narrative-wise, its penchant for ambiguity cuts both ways, proving both alluring and distancing. And, its gravitation towards glistening images of meat threatens to cut off a few more slices than needed.

Where the film unreservedly shines, though, is in its pinpoint casting. Medel (Fourteen, Notes on an Appearance) inches slightly ahead in the screen-time stakes and ensures that Alice is both relatable and fraught; viewers can empathize with her emotional state, but not always her choices. In the movie’s steelier yet also still vulnerable role, Burdge (Easy, Her Smell) explores yearning not through neediness but action, with the determined glimmer in her eye when Bret is following one possible trail silently screaming with both pain and purpose. Also notable: Vincent James Prendergast (Computer Chess, Baghead) as the fellow bank worker who doesn’t quite bore Alice to sleep with his inane nattering, yet comes close. The Carnivores doesn’t necessarily need the overt reminder, but his part succinctly illustrates that the need to consume extends beyond love, romantic connections and the bond with a pet — to simply monopolizing someone’s attention by any means necessary.