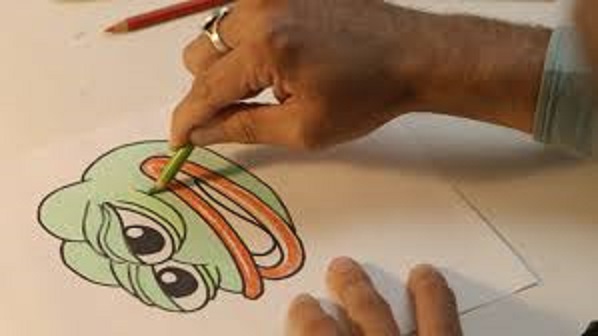 Like most comic artists, Matt Furie had a character he developed as a kid that he kept coming back to. It was a frog, with big, groggily eyes and a huge mouth that would someday be described by right-wing shock jock Alex Jones as “tubular.”

Furie named his frog Pepe, gave him some friends, and created the independent comic book called Boys Club. The drawings were crude and the jokes were cruder, many about bodies and bodily functions. One, inspired by a bathroom encounter Furie had in second grade, featured Pepe pulling his pants down to his ankles to pee. When asked why, he replies, “Feels good, man.”

Okay, maybe that’s not your idea of entertainment. I’m pretty sure it’s not your idea of the ideal emblem of the most virulent hatred and violence, used to promote the destruction of all of society’s foundational principles. And yet, that’s where Pepe ended up, and Feels Good Man is a documentary about how that happened, why it happened, what happened when it happened, and what it was like for Furie to see his creation used to promote the most virulent, pernicious, all-out revolting ideas.

Furie is a likable guy who admits that he feels at home in his old “office,” the toy department of a thrift store. “I basically just want to be young again.” He is not a slacker; he is industrious and is devoted to his partner and a daughter. But he has a slacker persona that in the past might have been referred to as a nebbish. And his humor is distinctly juvenile — see the pants-around-the-ankles scene above.

But Pepe goes from being mildly transgressive to swastika-level insignia of evil when there’s a perfect storm of unprecedented factors. And we see the oxymoronically-named Furie go from “I was like ha-ha, whatever” and “As an artist myself I did not want to interfere with another artist” to efforts to fight back, at first ineffectual, even counter-productive, but then with the help of some lawyers and an unexpected boost half a world away, having some impact. At one point he says, “It definitely sucks but nothing’s forever.” He may be wrong about that. One of the most disturbing elements of this story is the way that every effort to reclaim the little frog-face just pours gasoline on the fire.

One element that made a little-known comic book character into the symbol of the alt-right was, of course, the internet, particularly a nasty backwater called 4Chan. For those who do not know what it is, think of Facebook as the middle class suburbs, Reddit as the metropolis with a range from hipster to sophisticated to neighborhoods you might not want to walk through, and 4Chan as ranging from the place where kids kicked out of school go to smoke and trash everyone and a toxic waste dump. We see 4Chaners proudly post photos of their trash-covered “rooms” in their parents’ basements. The site is completely anonymous and posts are essentially graded by other users, so the incentive is to be as outrageous as possible. “Owning your weirdness is perfect 4Chan ethos,” one user explains.

Add to that the reference to Richard Dawkins one commenter in the film notes: “biology is driven by genes, but culture is driven by memes.” There’s a reason fast-spreading internet media like memes are referred to as viral. As they are passed along exponentially, they can duplicate, mutate, and inspire responses that themselves duplicate and mutate. So somewhere, sometime, someone chose a picture of Pepe saying “Feels good, man” (according the film, moving virally from body builders on Instagram to 4Chan) and then, because it was such “an easily adaptable image” it became attached to 4Chan. Your mom might add okay signs and heart emojis to her texts. 4Chaners had Pepe in a grotesque competition to see who could make the image the most shocking and offensive. And if the “normies” (non-4Chaners who consider themselves “normal”) object, well, that’s just the 21st century version of Épater la bourgeoisie.

It takes the mainstream media a while to catch on (one confused newscaster refers to a Pepe symbol as “the Grinch in a mask”), but the Trump campaign’s director of strategy and data, Matt Braynard, got it right away, calling Donald Trump “a real-life version of Pepe” for his “ability to elicit a reaction and to capture and express people’s hopes and fears.” As John Michael Greer puts it, “Pepe was Trump’s invisible running mate.”

Finally, Alex Jones appropriates Pepe in an item for sale, making it a copyright violation worth pursuing, and one of the film’s highlights is the footage from the depositions of both Furie and Jones. One of Jones’ attorneys tries to badger Furie with tough questions like why he did not seek a license for a particular drawing, and Furie pointed out that he was in sixth grade when he created that image so no, he did not seek a license.

This is not Furie’s story, or even Pepe’s. It is the story of us, and it illuminates some confusing and painful realities about the way we communicate, form opinions, and make vital decisions about the future of our country, and so much that doesn’t feel good, man.