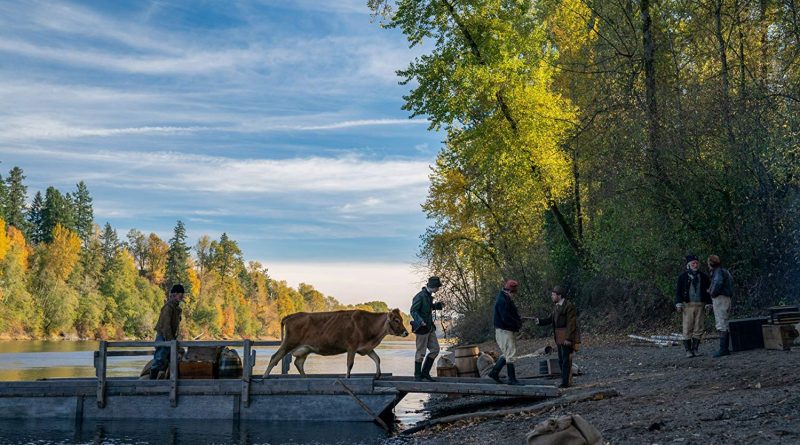 Current day, a young woman and her dog wander on a rocky beach in a Pacific Northwest environment. Poking around, she accidentally uncovers two skeletons lying side by side. Who? Why? The mystery unravels in a flashback to the harsh 1820s Oregon frontier survival where, escaping brutal treatment indentured as a chef to trappers, Cookie meets Chinese immigrant King Lu.

The pair forge an interdependent, strong bond out of a desperation that becomes mutual appreciation, even tender friendship. Their eventual business endeavor involves the title First Cow in the area. Stealing her milk each evening, they cook and sell delicious biscuits, soon much in demand. But how long will the cow’s British owner called Chief Factor remain clueless? Feeling both exquisitely believable and unnervingly real, the action builds from a restrained tension to outright confrontation.

Based on Jonathan Raymond’s novel The Half-Life, First Cow is a thoroughly absorbing story of atypical, three-dimensional characters. Director and co-writer (along with Raymond) Kelly Reichardt shows again an extraordinary ability to capture the look and feel of nineteenth century America, as she did in Meek’s Cutoff. Moreover, Reichardt doesn’t flinch from presenting the dirt and squalor, the struggle for the basics of food and shelter, and the violence barely suppressed and ready to erupt at any moment.

At the film’s Telluride Film Festival premiere I attended, Reichardt spoke about using Remington as inspiration for the color scheme. Cinematically, she combined greens and blues for a periwinkle hue. Muddy skies vied with coral-colored stars for nighttime effervescence. She added influences from Japanese director Kenji Mizoguchi’s Ugetsu and, of course, Robert Altman’s McCabe & Mrs. Miller. The result is an environment that breathes with a palpable presence, a dramatically defined frontier world.

Performances by John Magaro as Cookie and Orion Lee as King Lu are completely convincing and appealingly natural, relaxed with an edge about them. Toby Jones, called Chief Factor, is an initially clueless and ultimately vengeful dupe. In a sweet postscript, Evie, the beautiful, calm cow cast from many candidates, has since had a calf. Name? Cookie. First Cow is not to be missed for its exquisite storytelling.