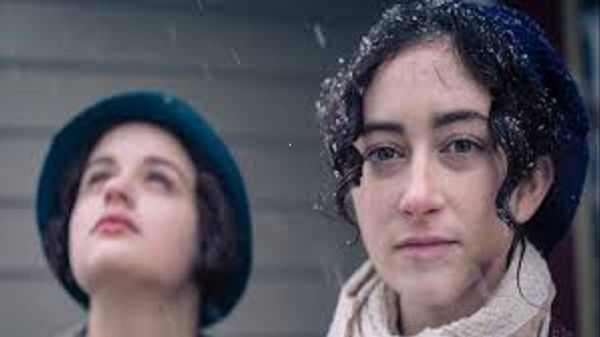 I first heard the extraordinary story of the radium girls from Deborah Blum’s book The Poisoner’s Handbook and the PBS documentary based on it (both worth checking out). Getting introduced to the new feature film Radium Girls is a revelation; a rich dramatization of the historical events that took place in Orange, NJ in 1927-28. Joey King and Abby Quinn beautifully play sisters Bessie and Josephine Cavallo (apparently based on the real life sisters Quinta McDonald and Albina Larice). Both young women work at the American Radium factory where their sole task is to paint watch dials with glowing radium, turning their little brushes into fine-point tips by touching the toxic chemical to their mouths. Other workers, including their older sister, for years have been suffering from horrible bone degeneration leading inevitably to death. No one has informed the girls that the radium, touted as a miracle cure and a benign beautifier that they paint on their faces and fingernails, is deadly poison.

Directed by Lydia Dean Pilcher and Ginny Mohler, who co-wrote the original screenplay with Brittany Shaw, Radium Girls blends period social drama, courtroom intrigue, labor history and a women’s empowerment message. As Bessie befriends a group of young Communists and social justice crusaders,she grows increasingly radicalized especially once Jo’s health starts to decline. A company doctor tells Jo she has syphilis, the blanket diagnosis for all the girls who exhibit symptoms; a form of gaslighting in the assumption that the young women will be too embarrassed to go public. But Bessie, Jo and a few other girls meet with consumer advocate Wiley Stephens (Cara Seymour) and launch a lawsuit aimed at not just closing the factory but getting the owners to admit they knew the dangers of radium and exposed their workers to it anyway. An underdog battling a callous corporation that knowingly poisoned citizens movie in the spirit of Erin Brockovich and A Civil Action, Radium Girls takes place during the Jazz Age but it holds powerful, far-reaching relevance for today.