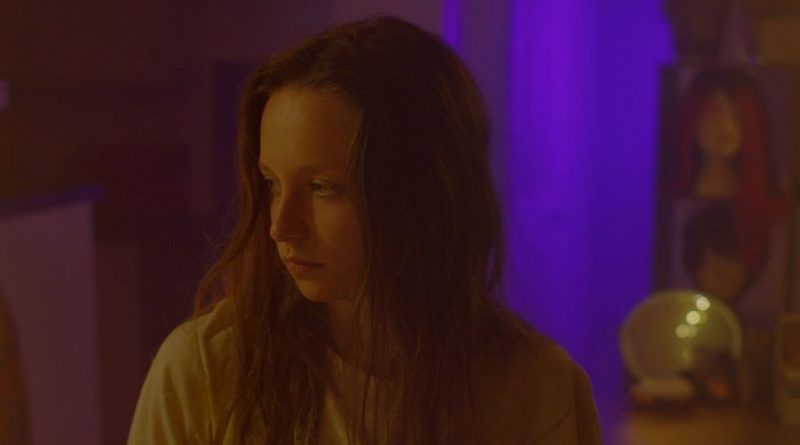 To most, the rush and crash of the ocean proves a soothing sound, signaling lazy days whiled away on the sand, vacations spent swashing around in the water, and that sun-dappled summertime feeling of everyday routines completely standing still. To first-time feature writer/director Claire Oakley, her debut film Make Up and the movie’s 18-year-old protagonist Ruth (Molly Windsor), however, the roar of the Cornish seaside is equally unnerving and alluring — a force that threatens as much as it calms, and entices while splashing its dangers anywhere and everywhere.

Oakley commences Make Up with the din of waves in the thick of night, instantly subverting the seaside vacation idyll. When Ruth arrives at the ocean-adjacent caravan park where her boyfriend of three years, Tom (Joseph Quinn), works winters, she does so under cover of darkness, via a windy road illuminated only by car headlights, and with zero signs of standard holiday fanfare. Yet, even as the noise of the sea and the accompanying breeze both pulsate like the nerves clearly jittering beneath the teen’s pale skin, she’s eager to be there. That remains the case when Tom’s response to their surprise reunion is more subdued than expected and, poking around the trailer he’s been calling home, when Ruth spies a lipstick kiss smudged across his mirror and a strand of long red hair strewn across his clothing.

Make Up falls into many categories: a relationship drama, a coming-of-age tale, a voyage of inner discovery, a psychological thriller, a body horror film and a queer romance. It takes its title from the cosmetics that confident park employee Jade (Stefanie Martini) encourages Ruth to wear, with friendship blossoming even as the latter wonders whether the fading scarlet streaks in her new pal’s hair are a blazing warning. But more than any genre or narrative type, it’s the roll and rumble of the ocean that cuts to the heart of this emotionally layered and astute feature. Ruth has followed Tom to Cornwall so they can be together, but she doesn’t quite know how to handle the unexpected ebbs, flows, crests and tides of their relationship, including her suspicions that he’s seeing someone else. She’s cast adrift from her grasp on normality and perhaps reality, too, thanks to strange noises and images that seem to follow her around. And, thanks to a character detail that doubles as an overt but perceptive piece of symbolism, she has followed him to a place where the ocean is inescapable — but she can’t swim.

In an economical script that’s judicious with its plot developments but firmly steeped in its protagonist’s mindset, Oakley charts Ruth’s attempts to cope and adjust — to wade through the new waters she suddenly finds herself in, sometimes literally, and to decide where to splash carefully, where to tread water and where to dive in deep. The sea continues to feature prominently yet never overbearingly, its waves and gusts of wind peppered throughout the film’s internalised soundscape (courtesy of sound designer Ania Pryzgoda), and its sights beckoning beyond the caravan park’s claustrophobic daily minutiae (as lensed with disquieting serenity by cinematographer Nick Cooke). Meanwhile, a restless ocean of uncertainty swells inside Ruth as she tries to track down the elusive redhead, feels the distance growing between herself and Tom with every passing moment and, as they slowly bond over drinks, drugs and dress-ups, becomes drawn to Jade in ways she would have never previously expected.

While shades of Andrea Arnold’s Fish Tank and American Honey swim through Make Up — two of the best recent features charting female journeys of self-awakening, as well as two of the most moving and lyrical — the more that Oakley plunges into Ruth’s internal turmoil, framing every aspect of the film as a reflection of her inner state, the more she finds her own pool to paddle in. As anchored by Windsor’s weighty performance, which is short on words but rides a tide of emotions via physicality alone, Make Up thrives due to its willingness to embrace but never simplify its various, seemingly contrasting elements. In other hands, segueing from Ruth and Tom’s waning romance, to bloody acrylic nails being discarded in a sink, to Ruth’s increased willingness to make drastic choices might be jarring. The same could be said of intermingling tense visions of eerie figures enveloped in plastic-wrapped caravans, and the unspoken tenderness simmering beneath Ruth and Jade’s awkward but affectionate exchanges, too. But Oakley handles the mélange expertly, with this mix of different aspects as pivotal to Make Up as the sea — and both illustrating, in every frame, the conflicting feelings rising, falling, bustling and jostling within Ruth in this involving, engaging and emotionally authentic film.