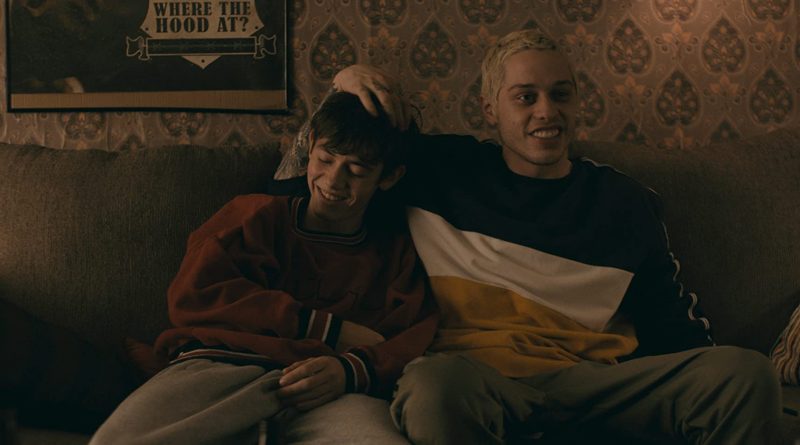 When a film pulls off a masterstroke of casting, the effect is obvious. Envisaging anyone else in the role becomes impossible, and even contemplating another actor in the part seems preposterous. Such is the case with Big Time Adolescence, which hangs shrewdly, firmly and engagingly off of Pete Davidson’s lanky shoulders. It mightn’t appear much of a stretch to task the Saturday Night Live star with playing a tall, tattooed, peroxide-locked, overly confident stoner-slacker — one with far more attitude than direction, and with questionable opinions on romance, too — but it’s pivotal to this coming-of-age comedy about a quiet high schooler, the 23-year-old best friend he reveres, and the rite-of-passage realization that teen dreams and adult realities rarely ultimately coincide.

In a loose, naturalistic performance, Davidson plays Zeke, the unofficial guiding hand to 16-year-old Mo (Griffin Gluck). Zeke once dated Mo’s older sister Kate (Emily Arlook) — and while that relationship crumbled when she started to tire of his immature ways, the bonds of pseudo-brotherhood have remained strong. When Mo was ten, Zeke treated him like an equal when no one else did, taking him on rollercoasters, sneaking him into movies and never making him feel like a kid. Six years later, they’re now sharing beers, cigarettes and just generally hanging out with Zeke’s friends in the house that he inherited from his grandmother. In Zeke, Mo has an idol. In Mo, Zeke has a protégé, mascot, joined-to-the-hip mini-me and ongoing source of worship. And to the surprise of no one, Mo’s caring, cautious, increasingly perplexed dad Reuben (Jon Cryer) isn’t thrilled.

Written and directed by Jason Orley, a feature first-timer who also helmed Davidson’s recent Netflix standup special Pete Davidson: Alive from New York — and has an assistant stint on Nancy Meyers’ It’s Complicated to his name as well— Big Time Adolescence treads down a narrative path familiar from a wealth of high-school set tales about impressionable kids falling into the thrall of imperfect role models. Indeed, Reuben’s fears about Zeke’s influence prove well-founded when, in an effort to appear cool, Mo agrees to start selling Zeke’s drugs to his own wealthier classmates. Mo is also trying to impress Sophie (Oona Laurence), the girl he hasn’t been able to work up the nerve to talk to until they cross paths at a party. In both scenarios, he takes Zeke’s advice as gospel, even as his gut tells him that pushing weed to his peers and ignoring the girl of his dreams aren’t the best ideas.

It’s no discredit to Orley, his frequently amusing script, his knack for realistic dialogue or the film’s glossy teen movie sheen to note that, in casting Davidson, he made his savviest move. Big Time Adolescence needs Davidson to strut in Zeke’s shoes, to typify twenty-something arrested development and to brandish the kind of energy that’s hovered around the performer ever since he started becoming more famous for his private life than his career. It needs that presence, wrapped with a devil-may-care smirk and packaged with relaxed charm, as well. Without it, Mo’s connection to Zeke would feel thin — and that’s what the entire feature hinges upon. This isn’t just a movie about a kid attempting to be popular, endeavoring to woo his first girlfriend and stressing out his parents, although the template definitely fits. More than that, however, it’s a film about a teen who has grown up with one concept of maturity and one vision of approaching life with a casual, anything goes, “you only live once” attitude, but finds himself reassessing his choices — as well as the friend that’s shaped them.

Big Time Adolescence also benefits from Davidson’s comic delivery, both physically and verbally, whether Zeke is dancing to a record he buys on impulse with his drug earnings or making the purchase of a foot spa sound like the most important thing in his life. And, it makes the most of his his ability to segue from layabout ebullience to eventual hints of introspection, in a film with a clear but never overstressed message about the right and wrong decisions to make. Gluck, sporting the right mix of poise, uncertainty and awkwardness, is also nicely cast. Cryer, reminding 80s teen film fans of his own experience in the genre, gives weight to what could’ve been a stock-standard role — and while Laurence’s Sophie isn’t afforded much depth, her rapport with Gluck ripples with authenticity. But in a movie that fleshes out a well-worn narrative arc by diving into that time in every adolescent’s life when they take risks, make mistakes, follow messy paths, and begin to reassess what and who is important, understanding the layered allure of Zeke and Mo’s friendship is paramount. And thanks to great central casting, it’s so keenly explored and wholly relatable that it feels as if it could’ve been ripped from everyone’s teenage memories, too.