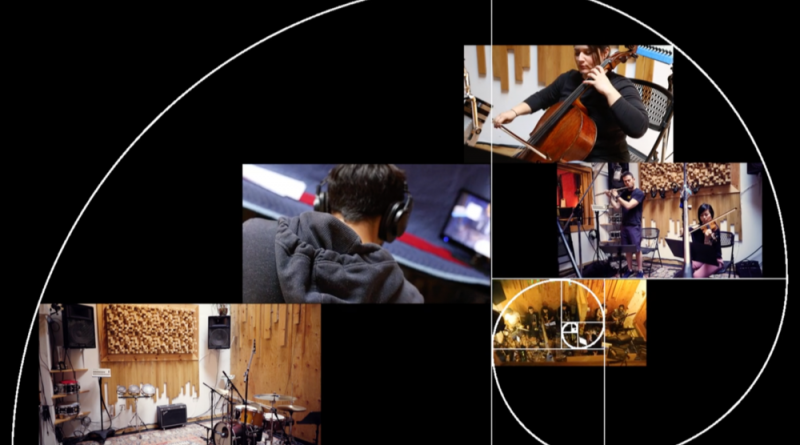 For anyone not conversant with the Fibonacci sequence, and that certainly includes me, In Flowers Through Space is an educational, cerebral and auditory experience that asks for one simple indulgence: abandon conventional, unadventurous ideas about music for at least its sixty-six minutes.

While most documentary films on musicians profile the artist’s life (often in excruciating detail), director Dennis Cahlo spends no more than five minutes on creator E. Scott Lindner’s backstory.
With a refreshingly unique approach, Cahlo focuses on the complex production of just one album, In Flowers Through Space, that gives the films its title.

And what an album it is, for producer Lindner uses the Fibonacci sequence as his inspiration. For those of us not up to speed on the concept, it is the idea that each number in a sequence is the addition of the previous two numbers. Therefore, the string progresses as: 0, 1, 1, 2, 3, 5, 8, 13, 21 and so on. Lindner works up to 21 musicians after beginning with 1—he forgot 0 and had to add it during the engineer’s mastering the album.

The Fibonacci sequence occurs as (Google source) “the closest approximation in integers to the logarithmic spiral series.” Lindner asserts that this musical formula is confirmed by observations in nature, coming to life for Lindner through observation of flowers and space. To illustrate, gorgeous, spiral constructed flowers punctuate the production of the various musical tracks. Each track addition comes with, appropriately, an increased number of contributing musicians. As added punctuation, animation of ideas about space interpret musical compositions.

Extending his inspiration to freedom for his musicians, they’re given very few directions for their own creations; for example, the instructions to Pablo Eluchans for his drums contribution was: “You’re driving on a beautiful summer day on the streets of New York, only to realize you’re actually in Spain. An animal gets hit by a car but walks away happy.” As Eluchans explains, his job was to channel these ideas through his unscripted piece. Another direction was: “Wonka and Bond float through the unknown universe on a magical journey of discovery and dreams.”

The most rewarding aspect of the documentary is watching the progression from one to twenty-one musicians as they gamely jump into this wildly inventive experiment. How I wish more artists had the inspiration and courage to follow their dreams as Lindner does.