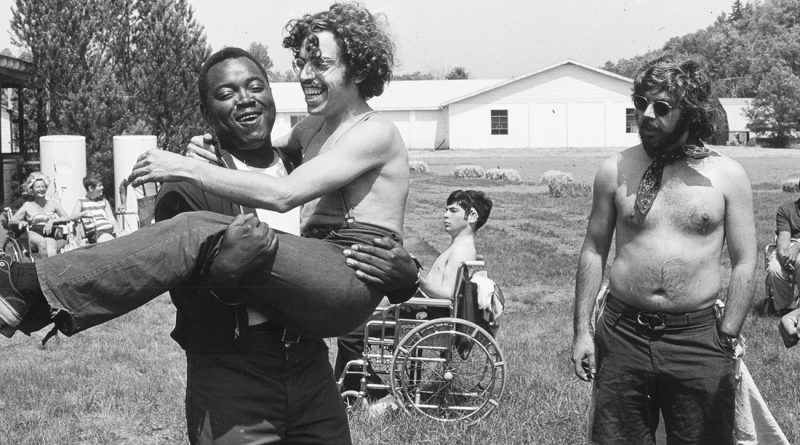 The subtitle for the excellent documentary, “Crip Camp,” now running on Netflix, is A Disability Revolution. That means a lot. Yes, the film begins with a camp in upstate New York that welcomed the disabled, but the film, like the camp, opened to wider possibilities. The subtitle speaks eloquently to that revolution.

James Lebrecht, who wrote and directed with Nicole Newnham, was born with spinal bifida. Old family films show one determined little boy. He first attended Camp Jened, nicknamed “Crip Camp,” when he was 15. In voice-over, he explains that he had never been with so many other disabled teenagers before, and the population changed him forever. Over dinner, they shared their despair at being excluded, at being over-protected, at being assumed to be asexual.

Lebrecht expands on scenes in a vintage film shot in the Seventies, spotlighting a number of the campers that year. Those people appear over and over in the film, for, as activists, they were the disabled who revolted a few years later. They had become committed to the civil rights of the disabled.

Chief among them was Judy Heumann. To see her as a teen at the camp, making sure everyone had a voice, even as to what to cook for dinner, is to see the seed that flowered during the movement movement. She is not confined by her wheelchair but moved into the world. From that chair, she leads her fellow crips in demonstrations and “sit-ins,” so to speak, to convince the powers that be to enforce Section 504 of the Civil Rights Act. One of the powers, Joseph Califano, was head of Health and Human Services in President Jimmy Carter’s cabinet. The group demonstrated outside Califano’s house while he waffled about how institutions did not want to have to pay to redesign entrances.

When that got precisely nowhere, Heumann led disabled people to fight for the passage of the Americans with Disabilities Act. They stopped traffic with their wheelchairs, they crawled up the steps of the houses of government in D.C., and they — Heumann in particular — confronted politicos who did not want to require schools and cities to accommodate the handicapped. They sought help from the Black Panthers, who fed them selflessly during the fight for civil rights. They were fierce, and they spoke up even when their voices were cracked or garbled. They were amazing, and like the women in the suffrage movement for suffrage, they are often written out of history as if the law were just handed to them out of the goodness of law-makers’ hearts. President George H. W. Bush finally signed the ADA on July 26, 1990.

Crip Camp is a remarkable documentary, full of vintage music and righteous indignation. It is also full of love and compassion. The necrology at the end listing the activists we saw first as teenagers at Camp Jened hurts because we grew to know them through their deeds in this film. They made us better, more able Americans.