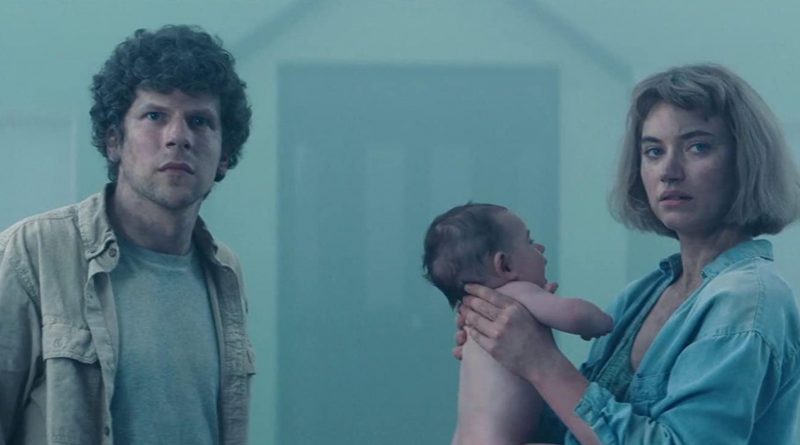 Watch carefully as the introductory scene with the cuckoo birds shows how they trick other birds into raising their young. It’s a metaphor that foreshadows what’s about to unfold.

Thirtysomething landscaper Tom (Jesse Eisenberg) and his schoolteacher girlfriend Gemma (Imogen Poots) are thinking about taking the next step in their lives by buying a home in suburbia. So they talk with a creepy real estate agent (Jonathan Aris).

Intrigued by a newly planned community called Yonder – boasting the ominous slogan: “You’re home. Forever.” – they decide to view one of the identical, prefabricated properties, which are arranged in looping, labyrinthine subdivisions, only to discover there’s no way out!

Without phone or internet, they’re obviously trapped in this eerie maze. So when groceries and medical supplies arrive, they settle into fully furnished starter home #9, trying to make the best of a sinister situation.

Then a parcel containing a baby boy appears with a note, informing them that – if they’ll raise this child – they’ll be released. The rapidly growing boy (Senan Jennings) is human in form but alien in his ghoulish ability to mimic his adoptive parents.

Working from a screenplay by Garret Shanley, Irish director Lorcan Finnegan fashions a cautionary, contemporary horror story, reminiscent of one of Rod Serling’s Twilight Zone episodes, only not as well written, particularly in the second act.

The title Vivarium is defined as “an enclosure, container or structure adapted or prepared for keeping animals under semi-natural conditions for observation or study or as pets.”

On the Granger Movie Gauge of 1 to 10, Vivarium is a cynical, surreal, suspenseful 6. Available to rent or buy on iTunes, Google Play, Vudu and other streaming platforms.