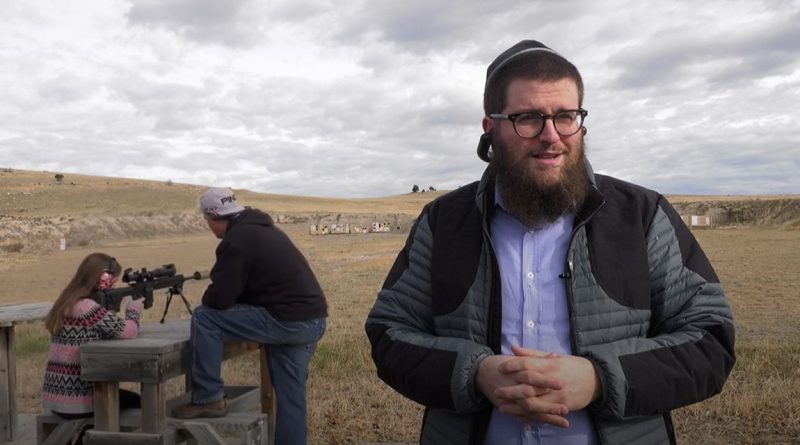 Did you hear the one about the Brooklyn rabbi who moves to Montana and celebrates his daughter’s birthday at a shooting range?

There’s no punchline to this. It’s a real scene from The Rabbi Goes West, a fascinating and surprising documentary about the Jewish community in Big Sky Country.

The biggest surprise to many will be the fact that there is a Jewish community in Montana. And it’s thriving. (Although, to put the definition of “thriving” in perspective, there are less than 2000 Jewish families in an area that’s 14 times larger than Israel.)

In fact, it’s such a promising area that Rabbi Chaim Bruk, his wife and five adopted children left Crown Heights to open a Chabad Center in Bozeman. For those not familiar with the Chabad-Lubavitch movement, it’s a brand of Orthodox Hasidic Judaism that believes in Zionism, strict gender roles and the eventual arrival of the Messiah.

But what they seem to believe in, above all, is the importance of getting more Jews to embrace their religion.

“I’m God’s salesman,” Rabbi Bruk laughs at the beginning of the movie. He’s determined to put a kosher mezuzah on the door frame of every Jewish home in the state – a state which has recently struggled with anti-Semitic attacks by neo-Nazis – and the exuberant rabbi is not going to stop until he’s accomplished that goal.

And this is where the drama comes in.

There are already well-established congregations in these areas and their rabbis are skeptical of the new sheriff rabbi in town, convinced that his ways of trying to attract Jews are, well, unorthodox.

As they point out, Jews, in general, don’t believe in proselytizing. They accuse Rabbi Bruk of being a missionary but he disagrees, saying he’s not out to convert anyone. They also describe Chabad as “a cult of sorts,” although, as Rabbi Bruk points out, people are always free to come and go as they please.

The Chabad Center in Bozeman is all about “Judaism without conditions,” according to one member. It’s a place where the community gathers for Scotch and sushi and to celebrate the Jewish holidays.

Rabbi Bruk comes up against three prominent Montana rabbis who disagree with him on most points yet try to include him in their group activities, although he doesn’t accept or reciprocate their invitations. There’s Rabbi Francine Roston, who broke the “stained glass ceiling” as the Conservative female rabbi of a huge congregation in New Jersey; Rabbi Allen Sacher, the state’s senior rabbi; and Reform Rabbi Ed Stafman, who has a powerful and insightful onscreen conversation with Rabbi Bruk that reveals the vast differences between two men who, in theory, share the same religion.

Filmmakers Gerald Peary and Amy Geller do a great job of remaining neutral so you can come to your own conclusions. They open your eyes, showing you all the different sides, and then, in the spirit of Jews when they’ve had enough, wish you a Zei Gezunt so you can finish the discussion on your own.