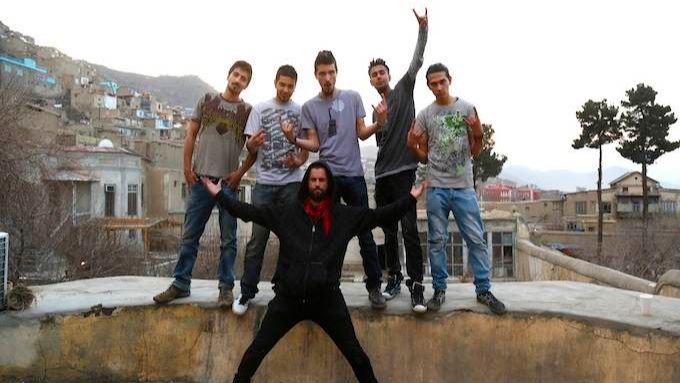 Rock and roll has always been about rebellion, but RocKabul, a documentary about a heavy metal band in Afghanistan, takes that idea to a whole new level.

What makes the story so riveting is that these guys literally risk their lives to play their music. Sure, they worry – like all other performers – about bombing onstage but they’re way more worried about actually being bombed. The risks are devastatingly high.

Travis Beard, an Australian photojournalist and musician, met District Unknown – the first metal band in Afghanistan – in 2009, and invited them to his house in Kabul because they needed a safe space to practice away from the authorities.

You see, music was forbidden when the Taliban was in power, and rock musicians, especially, were known as Satanists. In fact, as one Taliban judge warns, “It is permitted to kill people who choose this path.”

Beard does a great job of setting the scene, interspersing the band’s story with the violence on the streets and President Obama’s speeches about pulling troops out of Afghanistan. District Unknown’s personal story is deeply connected with what’s going on in the country – explosions, suicide bombings and power outages are part of their everyday lives and add a life and death dimension to the challenges they face as they pursue their dreams.

“It’s a battlefield,” despairs one member. “The fear of sudden death is always there.”

District Unknown is never cavalier about that, which keeps us truly invested in their story – and their well-being.

The band members are two brothers and two cousins, and their genuine love for each other is apparent. These guys are so adorable and engaging; in another place and time, they might have become a boy band. But it’s no surprise they became head bangers. If you lived in a city like this, you’d probably feel like banging your head all the time, too.

When we first meet the guys, they laugh as they admit they’re only champions of air instruments. Their first practice is a self-acknowledged disaster but they’re eager to improve and Beard becomes their mentor.

District Unknown starts their unlikely ascent, eventually playing at music festivals domestically and internationally. They even become part of a Rolling Stone article. Their excitement is infectious.

Because their careers – their lives – are so dependent on what happens in Afghanistan, though, when conditions worsen and the guys begin to really fear for their safety, the band, well, disbands. Its members head to different parts of the world to start a new chapter.

Whether you’re a fan of music, history or simply the human condition, RocKabul will resonate with you. Maybe it will even inspire a new generation of musicians. Or, at least, rebels.