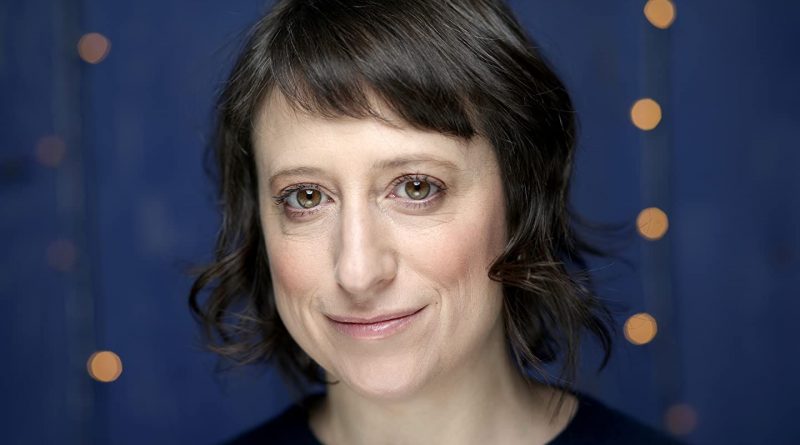 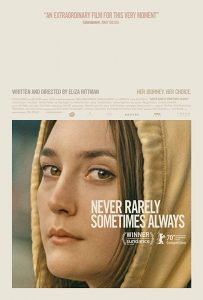 Writer/director Eliza Hittman did a lot of research for her film about a teenager who has to go to another state for an abortion, Never Rarely Sometimes Always. The authenticity of the story is deeply felt throughout the film, including the scene that inspired the title, with a real social worker playing the part of the social worker who gently questions the girl to see whether there are any concerns about her safety. In an interview, Hittman talked about taking the literal journey she would later show her characters on, why stories about teenagers are so compelling, and what her “dream world” would be for access to reproductive health care.

NELL MINOW: What are some of the risks and benefits of doing stories that are about teenagers?

ELIZA HITTMAN: I think stories about teenagers are very universal. They can speak to a young audience, but it’s also very easy for an adult audience to watch them and look back and reflect and identify. So, I think that the films that I make specifically speak to young people, but also to an adult audience.

NM: I know you did a great deal of research on this. Tell me how you started and who you talked to.

EH: It started in a small town in Pennsylvania. I became a little bit intrigued with this region of Pennsylvania that used to be a coal mining town, and I just decided that I wanted to set the film there.

The journey began there, and I asked myself: if I was a young woman in this town, and I was pregnant, where would I go? So, I began going into small “pregnancy care centers” and taking pregnancy tests, and going to little counselling sessions, and a lot of what you see represented in the film is a reflection of the conversations that I had with women in pregnancy care centers.

I got on the bus in that town and took the journey to New York City, and got off at Port Authority, and I really tried to immerse myself in the point of view of the character. I also spent a lot of time consulting with Planned Parenthood and other clinics, to make sure that not only the procedural aspects of the film were grounded in authenticity, but I really was intrigued by what everybody who works at a Planned Parenthood does. And I spent a lot of time meeting with social workers and asking about their experience taking in and caring for women who had traveled from out of state. 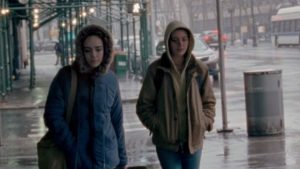 NM: Is Kelly Chapman, the woman in the film who asks the questions in the title really a social worker?

EH: She is, she’s a social worker. I met her at a clinic called Choices in Queens, which is privately owned, but she had trained at Planned Parenthood. I ended up consulting with her a lot on different aspects of the story. And then when I was writing it, I had her voice in my head. And then when I was casting, I felt like I was looking for someone like her, and then I ended up just deciding to cast her.

She was not the only person in the film for whom acting on film was a new experience. What do you tell those people about things that they’ve never done before? How to hit their marks, how to convey emotion, doing the same scene over and over.

Kelly in particular, she’s really doing the job that she does every day. But of course the version of the scene that she’s performing is scripted, so we spent a lot of time trying to make sure that she felt like herself, but that the scene was written in the style and language of the film. But she’s very much doing what she does, and drawing from her own personal and professional experiences.

NM: The “pregnancy care centers” are not staffed by medical professionals and Autumn even has to administer her own pregnancy test, the over-the-counter test you buy at the drug store. And then the place that does offer abortions makes her answer some very sensitive questions not specifically related to the procedure. Is it possible to have a world where abortion is treated like any other medical procedure?

I think that it’s an essential procedure, and it’s a time-sensitive issue. I think that in my dream world, everyone would have access.

NM: But how much should we ask young women who come in for this procedure about the context of what brought them there?

EH: In the case of this film, because she’s a minor in the situation that’s represented on screen in the film, they’re trying to assess whether or not consent was involved, and if they needed to call child protective services. But because she never discloses who the father is, so they can’t report. That’s what the film touches on obviously. But there is something that’s called the Safety Plan. And, you know, a Safety Plan is essentially a strategy for getting help should a woman need it when they leave the clinic. 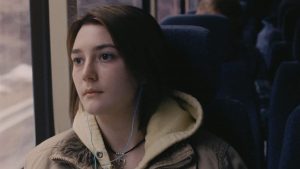 NM: We never find out who is the father of her child.

EH: My goal was to look at all of these male characters in her life, and to get a sense that they are all somewhat predatory. But my choice was to not reveal who the father was.

NM: How did you think about revealing the girls’ characters in the way they dressed?

EH: I believe in giving actors a lot of input over what their characters wear. I knew that because the film took place in winter that they were going to be bulky and in their coats for most of the film, and so those pieces specifically were the most important items that the characters wear. My costume designer and I went to the town where the film is set and we took a lot of pictures and looked for inspiration in the real place. And then we took Sidney Flanigan, who’s the actress who plays Autumn, we took her thrift shopping and we let her try on things to try and find a balance between something that felt comfortable to her, but also felt like the character..

NM: Why was it important to have two girls on the journey to New York, for Autumn to have a support person with her?

EH: It felt realistic. As a teenager growing up in New York, I remember taking many trips to Planned Parenthood with friends who were panicked about STDs or pregnancy concerns, and it felt like the most realistic choice would be to bring a friend. It wouldn’t be the same movie if she was on the journey alone. It would be a different story.

NM: Is this the kind of story or perspective on the story that particularly benefits from a woman’s perspective?

EH: Yes, I think that there’s a lot of films that deal with themes about reproductive rights and abortion, and they’re very rarely written or directed by a woman. So, I think it was important to kind of reclaim the narrative and explore it as truthfully as possible.

I started thinking about the film a long time ago, in 2012 when this woman in Ireland passed away because she could not get an abortion, Savita Halappanavar, and I was just reading about the journey that women would take across the Irish Sea to London from Ireland when they needed an abortion. I just thought it was a story that I really hadn’t seen before, and I’d always wanted to make a road movie, and I like procedural dramas, and I like coming-of-age stories, so I thought it was an opportunity to merge all of these different kinds of narratives into one. I’m also interested in taboos, and taboos around our sexual identities.