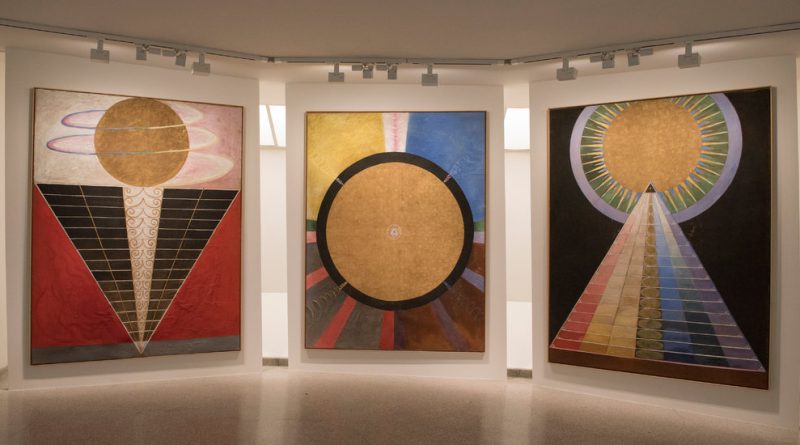 As an art gallery owner for almost 30 years, I’ve often used the expression “misogynist art mafia”, I know well the dearth of female artists represented in art history, and deal with a market that continues to sideline women, or discount their work as a temporary trend. It’s endlessly infuriating. The documentary Beyond the Visible, about artist Hilma af Klint, stands as a reaffirmation of how women have been dismissed, ignored, and uncredited. It also makes a case for Klint’s work being essential, and that it should be included in lectures and history books, and that she should be highlighted as Sweden’s premiere artist, as one of the vanguards of modern art and the first abstract artist.

She was creating images as early as 1906 that spoke to an aesthetic labeled ‘abstract’, but the style was only recognized later, when male artists Kandinsky and Mondrian came into prominence. Hilma af Klint just never got the recognition she deserved.

Director Halina Dryschka’s Beyond the Visible serves to change that, and it is engaging enough to expand understanding on a large scale if it finds an audience, which it deserves. The question we should all be asking, once again, is how many women in history have been sidelined that will never find a voice, and why are the male-centered establishments in so many industries so terrified to give them their due?

Through interviews, reenactments, and narration, we are guided through Klint’s life. She was born into an aristocratic family, and was not only talented, but was supported in her interest in painting. Being a woman, she was expected to only paint until she got married, but she lived her whole life in relative seclusion as a working artist. She built an impressive body of work inspired by philosophical queries and spiritual quests.

Spiritualism, taoism, and examinations into physics influenced her work. The connection, that many have noted, between her work and those who experience it, suggests these genuine considerations and the artist’s authentic expression of curiosity about the universe resonate deeply with viewers.

Klint believed her life’s work was meant to be taken all together. She left her collection to her nephew, stipulating the art not be seen for 20 years after her death, and requiring that the art never be sold. Hence the disconnect with the art world. If a painter paints a painting in the forest, but no one buys it, does it exist? Does it have any value? Since the commercial art business is and always has been run by moneyed men, as a woman who has broken visual barriers, and created images that predate many those of the most celebrated, lucrative male artists, Hilma af Klint’s work was not and is not something the art establishment wanted amplified. Thank goddess there are female curators out there like the Guggenheim’s Tracey Bashkoff willing to champion women who create.

I was fortunate enough to see the Klint exhibit ‘Paintings for the Future’ at the Guggenheim a few years ago, a show that broke all records for attendance. I was someone who actually saw several people crying as they sat and stared at her oversized paintings. There’s no question of her influence over her viewers. She may have been ignored by history until recently, but by more humanist measures, as in the ability to inspire, move witnesses of her vision, and cause introspection and internal queries, Hilma af Klint is incredibly successful. It takes films like Beyond the Visible to enlighten the world about hidden treasures in history.

EDITOR’S NOTE: Beyond the Visible: Hilma af Klint is AWFJ’s Movie of the Week for April 17, 2020