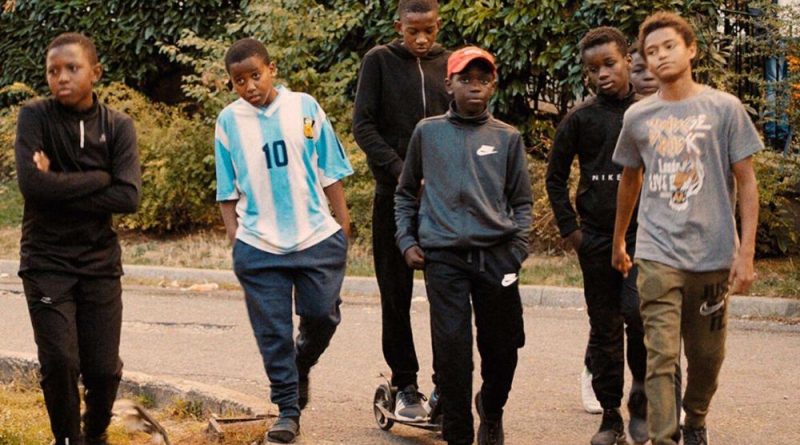 Co-written and directed by Ladj Ly, who was born and raised in Montfermeil, where Hugo set part of his story, it’s surprisingly relevant in contemporary culture, focusing on a real incident of police brutality.The story opens on July 15, 2018, as a troublemaking, streetwise youngster named Issa (Issa Perica) wears a French tricolor as if it were a cape. France is playing Croatia in the World Cup final, and thousands have gathered to watch.

When Kylian Mbappe, the son of a Cameroonian father and an Algerian mother, scores the final goal, enabling France to win the Cup, the Champs-Elysees erupts into a raucous, international festival.

Reporting for his first day on duty with the Street Crimes Unit (S.C.U.), Stephane (Damien Bonnard) cruises around the Montfermeil commune with the patrolling squad leader, hot-tempered, racist Chris (Alexis Manenti), and their laid-back colleague Gwada (Djebril Zonga) at the wheel of a gray Peugeot.

The veterans on the force denigrate the area’s crime boss (Steve Tientcheu), whom Chris dubs “our own Obama,” along with Salah (Almamy Kanoute), part of the Muslim Brotherhood.

Tension erupts with the disappearance of a baby lion cub named Jimmy, part of a small traveling circus. And high atop the roof of an apartment building in the infamous Les Bosquets housing projects, young tech-savvy Buzz (Al-Hassan Ly) launches a drone equipped with a camera that captures video footage of Issa, who is wanted for questioning, being pursued and wounded by the S.C.U.

The apocalyptic action sequences are vividly filmed by Julien Poupard, set to a Pink Noise soundtrack.

“My film is like a cry for help in a space that has been ignored for the last 30 years…This is a film I’m addressing to the politicians of France,” declares Ly, making his debut feature.

In French with English subtitles, Les Miserables is an incendiary 7, an urban thriller that’s available on Amazon.

EDITOR’S NOTE: You may also be interested in reading Diane Carson’s review of Les Miserables