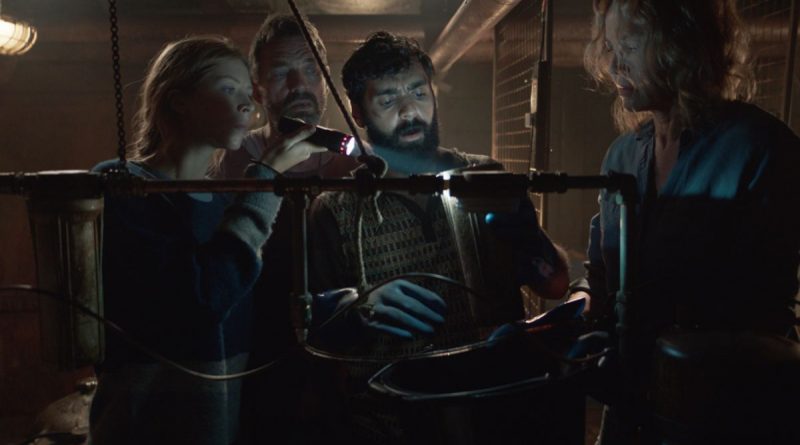 Steely Siobhan (Hermione Corfield) is a savvy but anti-social marine biology student who must spend some time doing field study in order to earn her doctoral degree. So she joins a crusty crew that includes Gerard (Dougray Scott), his wife Freya (Connie Nielsen), Johnny (Jack Hickey), Ciara (Olwen Fouere) and the engineer Omid (Ardalan Esmaili) aboard the Niamh Chinn-Oir.

Suddenly, the sea takes on a mysteriously phosphorescent glow as a giant jellyfish attaches itself to the hull, its long, glowing tentacles oozing microscopic, poisonous secretions that puncture and penetrate the wood. A strange, biological anomaly has totally disabled the boat.

In this cramped, claustrophobic setting, there’s a growing sense of eerie paranoia, particularly when they discover that the entire crew of another nearby vessel has suffered a gruesome demise.

How can they combat and contain this parasitic, primordial creature? And who will be infected next?

Unfortunately, she doesn’t spend enough time delineating and differentiating the various characters before they’re besieged and eliminated. There are a few superstitious allusions to Siobhan’s red hair being ‘bad luck’ and the seemingly rushed conclusion is frustratingly anti-climactic.

Nevertheless, Hardiman’s message about the importance of working together against an unknown entity and staying in self-quarantine to ensure the safety of others is particularly resonant and timely during the current pandemic.

On the Granger Movie Gauge of 1 to 10, “Sea Fever” is a slimy, slithering, sinister 6, soon available on Prime Video, Amazon, iTunes, Vudu, Blu-ray and Digital HD.