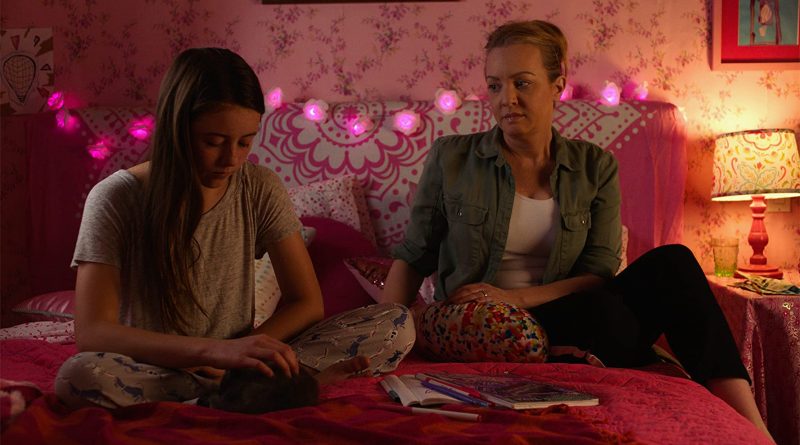 Sometimes, timing is crucial. And Blush’s timing is definitely off.

Nothing’s changed — except the context. Which changes everything.

Cathy (The Goldbergs’ Wendi McLendon-Covey) tries. My, how she tries. She can’t take a hike without picking up trash along the way. The school volunteer group she leads rebels against her can-do command. And she can’t resist reorganizing other people’s closets — and lives.

But her husband (Steve Little) ignores her and their middle-school daughter (Katie Alberts) literally flinches at Cathy’s every attempted touch.

Even her widowed sister Gail (Catherine Curtin), who’s going away on a long retreat, doesn’t trust Cathy to look after her cat. With good reason.

While at Gail’s house, Cathy finds herself drawn into the train-wreck orbit of a neighbor family.

There’s desperately upbeat mom Gemma Jean (Christine Woods), who appears to be in need of serious psychological help. She has a girlfriend but still lives with her seemingly mild-mannered ex-husband Paul (Graham Sibley). And their teenage son Xander (Max Burkholder) responds to Cathy’s motherly solicitude in extremely inappropriate ways.

Cathy attempts to balance her everyday existence — as numbingly predictable as a cozy Christmas letter — with the incipient chaos of her secret life, which threatens to derail her real one.

Or maybe it’s the other way around. Blush never quite figures that out.

Eisenstadt deserves credit for her sharp dialogue — and for trying to sidestep the usual earnest, learn-your-lessons narrative framework. But Blush never replaces that structure with anything equally effective.

Sometimes the movie’s trying to be funny. Sometimes it’s unsettling, setting up expectations of something downright sinister. And sometimes it just seems to lose its way, much like its central character.

As that central character, McLendon-Covey delivers a slyly arresting performance that keeps Blush stumbling along over extremely bumpy terrain. And, for a time, we’re willing to go along with her.

Ultimately, however, Blush bites off way too much more than it can successfully chew. That, in turn, makes the whole thing difficult to swallow.