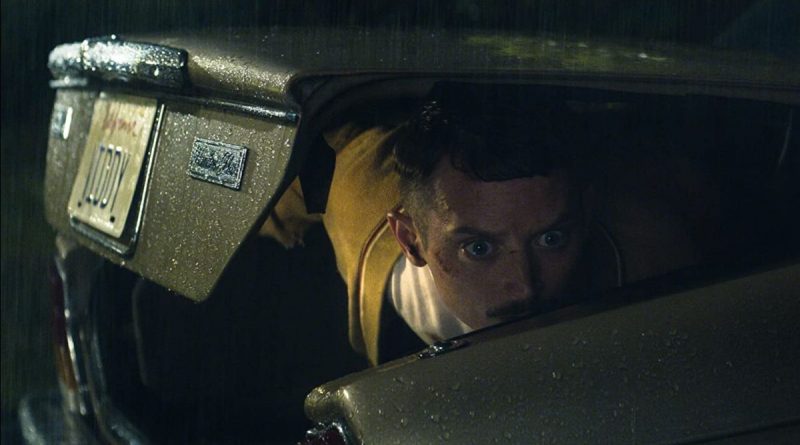 If Come to Daddy hadn’t initially premiered at the 2019 Tribeca Film Festival, then started making its way around the global festival circuit over the year that followed, it’d would’ve been the perfect COVID-19-era release. Naturally, the experience of watching New Zealand producer-turned-director Ant Timpson’s first stint behind the camera in a packed festival cinema long before the coronavirus ever emerged was, unsurprisingly, far different to the at-home, online, social distancing-heavy fashion that cinephiles are now getting their film fix; however the latter feels wholly appropriate for a taut, twisty horror-comedy about an estranged father and son reuniting in an isolated cabin surrounded by a lake on one side and sprawling forest on the other.

When he arrives at his dad’s secluded abode, Norval Greenwood (Elijah Wood) has been social distancing from his father for more than three decades, but not by choice. They’re brought face to face by an unexpected letter asking Norval to take some time out from his Beverly Hills life — “Do I DJ? Yes. Do I produce blazing beats? Yes. Do I tinkle the ivories? Yes,” he explains, when he’s not gushing over his limited-edition Lorde-designed cell phone — to pay a visit, with which he dutifully complies. Alas, from the moment he sets eyes upon the aggressive drunk (Stephen McHattie) at the door, Norval’s reunion with his dad is hardly filled with hugs, tender regrets and making up for missed opportunities. Instead, tension and awkwardness fills every moment, as uneasy pleasantries soon segue into bragging about being friends with Elton John, one-upmanship and, eventually, all-out vitriol thanks to years of pent-up resentment.

Timpson, working with a script by The Greasy Strangler writer Toby Harvard that’s not only based on the former’s own idea, but is inspired by his own experience, isn’t interested in making a standard drama about familial tensions in close quarters. After establishing the literal premise the title describes, Come to Daddy navigates the kind of evolving narrative that’s best discovered by watching — becoming an eerie mystery brimming with bumps and jumps, as well as unhinged crime thriller, all while proving gleefully unruly, deranged and gory in the process. Throughout it all, Norval is still a manchild with father issues forced to face his perpetual state of arrested development, plus the niggling feeling that his sense of self has always been lacking in his dad’s absence. Soon, though, he’s doing all that while sharing a house with an embalmed body, then grappling with strange men (Martin Donovan and Michael Smiley) and fighting for his life.

Come to Daddy’s tonal shifts would be enough to give viewers whiplash if Timpson wasn’t in such command of every swivel, shake and pivot, riding the wave from disquieting to riotous to amusing and back again with flair and finesse. While the end result can feel not just purposefully chaotic and absurd, but occasionally approaching the point of pushing its limits, the feature works best when it’s leaning into whatever vibe each particular scene calls for. Timpson’s influences are many, recalling Home Alone and Weekend at Bernies, in the movie’s own way, as much as Housebound, The ABCs of Death and The Field Guide to Evil-filled genre catalogue he’s overseen as a producer. That anthology films have featured so heavily on his resume is particularly apt, with Come to Daddy refusing to constrain its narrative or stylistic impulses — wrangling them to fit an overarching story, but never relinquishing the individuality and eccentricity inherent in each of the movie’s leaps into yet another direction.

Also in commanding form is Wood, although his character would never earn that description. Norval is simultaneously meek and self-assured — a consequence of the sheltered life that’s swiftly shattered by Come to Daddy’s strange turn of events — and Wood plays him to intriguing, beguiling perfection. It’s the latest impressive performance on the actor’s resume, and the latest stemming from his embrace of weirder, more offbeat genre fare of late (see: Maniac, Grand Piano and Open Windows, as well as his producing credits on the Nicolas Cage-starring Mandy and Color Out of Space). He’s in fine company, too, with Timpson amassing a committed supporting cast that helps complete Come to Daddy’s entertainingly anarchic aura, as seen in every word spat by McHattie, the frantic air surrounding Donovan, Smiley’s thoroughly unbalanced turn, and a brief but pivotal appearance by The Breaker Upperers’ Madeleine Sami.