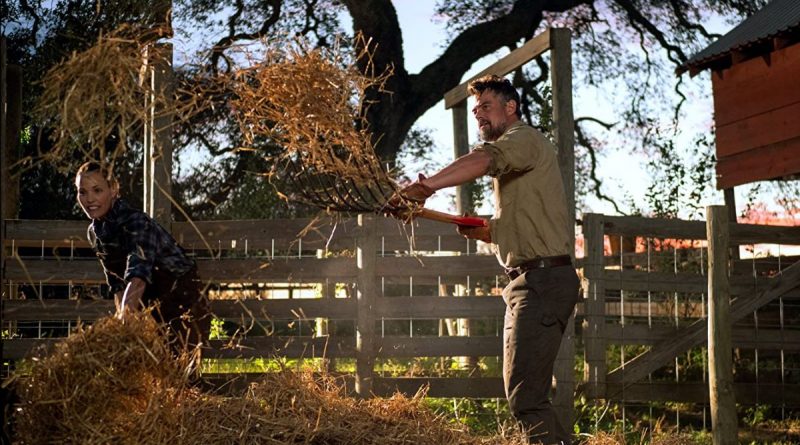 Writer Katherine Center is well recognized for her talent in telling wry, emotionally resonant stories with a striking balance of comedy, drama and romance. While we know that sometimes great source material loses its way in the translation to the big screen, I’m happy to report that that’s certainly not the case with The Lost Husband.

Adapted and directed by Vicky Wight, The Lost Husband is also a wonderful mix of romance and drama with a touch of sentimentality that borderlines but never quite dips into saccharine.

Leslie Bibb, best known for her comedic turns in TV and film, stars as Libby, a young mother of two kids whose husband recently passed away, leaving the family in financial ruin. Desperate and having worn out their time at Libby’s mom’s, the trio relocates to the farm run by Libby’s aunt Jean who the kids have never met and who Libby hasn’t seen in years.

It’s here that Libby meets James (a very rugged Josh Duhamel), the farm manager. Obviously there’s a romantic angle that will come into play here and while the development of this relationship could easily become the core of the movie, The Lost Husband stays squarely with Libby and the struggles that the newly-single mother is going through: children acting out, not having a home to call her own, having to rebuild her life again, not to mention dealing with the fallout of her previous life and a troubled family history.

Much like the author’s work, The Lost Husband is a wonderfully refreshing mix of drama and romance that doesn’t dwell simply on the romantic side plot. Wight doesn’t dwell on Libby and James’ pining for each other, instead allowing the characters to grow and breathe so they feel like real people with problems and troubles and people who make mistakes. That’s true of all characters here, from Libby and Jean right down to the kids, both of whom have their own well developed arcs.

While I love the characters and unfolding drama here, the romance factor is also a major attraction and in this respect, the movie also doesn’t disappoint. It certainly helps that the chemistry between Bibb and Duhamel is palpable from the moment the two appear on screen together and they carry that chemistry through to the film’s final, satisfying scene.

While some might find The Lost Husband a little too tidy, I appreciated Wight’s uncomplicated storytelling that also doesn’t pander to the audience. The Lost Husband clearly presents its themes up front and Wight and her team deliver a wonderfully touching, hugely satisfying movie.

The Lost Husband is available on VOD on April 10.