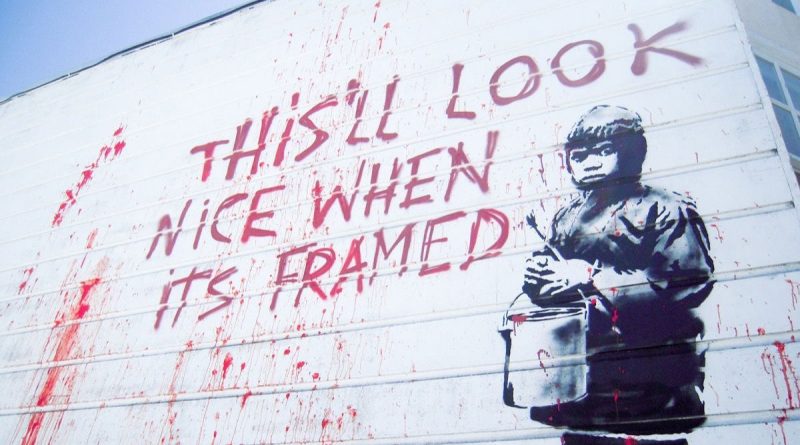 I remember the day that Sotheby’s auctioned off what was then called “Girl With a Balloon”. I had been following the rise of artist Banksy, (whom I will refer to as “they/them, not knowing the artist’s gender for sure), since their early days as a guerrilla street artist. From the beginning, Banksy has broken nearly all the rules set out by what I call the “art mafia”, the establishment of the art world which decides who is successful, who is worth collecting, and who deserves to be heralded as genius. That art mafia, which is nearly all made up of white men with money, manipulates the art world from the inner chambers of galleries like White Cube and Gagosian, with operations around the world and sites they control like ArtNet and Artsy. Ask anyone outside their favor how hard it is to make a living.

Enter Banksy, who not only doesn’t give a fig about what the art establishment wants or needs, they actively subvert it, choosing anonymity, and risking arrest, by creating art for the people on walls all over the world. The new documentary Banksy Most Wanted gives some background of this world famous figure, but largely focuses on the ongoing search to unmask the artist.

Paris-based filmmakers Aurélia Rouvier and Seamus Haley’s documentary has recent interviews with a variety of collectors, journalists, and fans around the world. They are fascinating, especially as they come from a perspective of people who see Banksy as the world’s most successful, talented, and important artist. The hyperbole is intense. His former agent calls them ‘the Leonardo da Vinci of the 21st century’, and “the most famous artist at any point in history”.

One French interviewee showers Banksy with praise, although that’s to be expected since the French have celebrated a wider diversity of genres as real art for decades. There’s also a smarmy gallerist named Robert Barton, who has found ways of removing public art Banksy made to exhibit and sell at auction, thereby increasing the value of his work, and effectively inserting them into the art market without the artist’s approval. Several journalists who claim to have discovered Banksy’s true identity are filmed, offering what they feel is proof for their varied assertions.

There are a number of documentaries on Banksy, most notably the Oscar-nominated Exit Through the Gift Shop, which is actually directed by the artist. The question is, what does this film do to expand awareness or offer something new on the subject? Why should we care who the artist actually is? If the film is meant to be more than just a lead-up to examining that question, what would that be? Do they realize that by including subjects so enamored with the artist, as well as those so obsessed with finding out their real identity, they are feeding into the art establishment and aiding the art mafia in their control over what art is placed on a pedestal?

Banksy has been clear about wanting to keep control themselves over pricing, releases, and availability, going so far as to create their own authentication and sales site. They have sold art on the street for $60 without announcing themselves, in order to allow true fans to access their work, something not mentioned in the documentary, by the way. They do, however, show Banksy’s altruistic drive in their exchange with a struggling gym owner who needed to sell the art on the side of his building to keep his gym open. The artist sent a letter giving the owner their blessing.

There’s no question this film was made with love for the artist, and a curiosity about their mythology, and in that respect it has value. It does not particularly serve to expand understanding. Banksy Most Wanted is entertaining enough, but deeper inquiry and less sensationalism would have made for a better film. Exit Through the Gift Shop is still worlds above it, and perhaps that’s because it was created by Banksy, a guerrilla artist who is just trying to change the narrative around what art means, and subvert the art mafia for themselves and those that come after them.