The time is always right for a creature movie. In good times it’s fun to get cozy with a loved one and get a little frightened together. In bad times, it’s reassuring to see people working together to defeat a common evil, real or perceived. The most effective of these are the stories that focus on the individuals, their motivation and how the decisions they make affect them and the outside world. 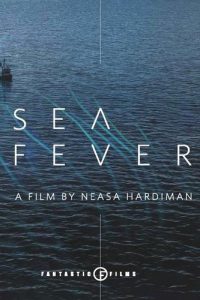 Multi-disciplinary writer/direct Neasa Hardiman’s feature film debut Sea Fever is one of these. The movie stars Hermione Corfield as Siobhán, a smart and solitary marine biology student who as part of her studies, finds herself cooped up on a fishing boat with a tight-knit crew for an entire week.

Under the leadership of veteran skippers Freya (Connie Nielsen) and Gerard (Dougray Scott) the crew sets off for what they hope is a good fishing trip but the jovial atmosphere quickly starts to erode. Tension begins to ratchet as members of the crew investigate an abandoned ship only to make a grizzly discovery. The tension turns to paranoia when crew members start to get sick and the boat attacked by an unknown parasite.

Sea Fever will be available on VOD and digital on Friday, April 10th.

Over a recent telephone call, I had a chance to speak with writer/director Neasa Hardiman about her intensely claustrophobic creature feature.

Marina Antunes: What was you inspiration for the film?

Neasa Hardiman: I love psychological thrillers. I love propulsive thrillers that also explore deeper questions. Ethical questions. For me, cinema is at its best when it offers a kind of dreamlike-collage of something that’s political and ethical; something chewy. 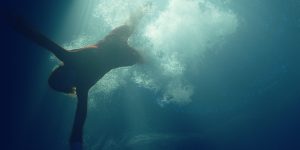 MA: So how long have you been working on this project?

NH: I guess it’s been a few years all in. It was probably a burst of writing a draft and then I’d go away and like something else. So it was over the course of four years I think. And I wrote in total of seven drafts of the screenplay.

MA: What kind of research went into the writing?

NH: I am a big nerd, so I love research. I think for the audience to buy into the suspense, it’s really important and we owe it to the audience to make everything as accurate as possible and absolutely grounded and authentic.

MA: Your cast is so natural together and you have such an amazing collection of actors. How much time did you have with them to prepare and for them to work together before you actually started filming?

NH: I know they were brilliant right? I was so lucky they were the best possible collaborators. And the truth is that we had zero preparation time. We had so little money to make the film. We could not afford rehearsal for even a half a day.

MA: Did you shoot on a boat or on a set?

NH: The first eight days of shooting we shot on the trawler that you see in the film, which is the real deal and is owned by a woman who was really helpful to me all the way through.

I thought about shooting the interiors on the boat and actually you could get the access but you could not get the gear in and with space at such a premium, it didn’t really work. What we did was take measurements and we rebuilt the interior on a studio set in Dublin. The designer rebuilt the entirety of the interiors of the boat. So its got ceilings, its got floors, its got ladders. You can move from one room to the other just like you’re really on the boat.

MA: You managed to capture the feeling of isolation but in close quarters. There’s a feeling of claustrophobia, especially with everyone kind of jumping over each other, which I thought was really well done.

NH: It’s really disturbing being on the boat because it leads to a kid of collective agoraphobia. You’re days away from shore. You look out and there’s nothing on the horizon. It’s a little like being in the desert.

MA: Over your career, you’ve worked in TV, you’ve done theater, you’ve written, you’ve done it all. How do you think your background has played into who you are as a director?

NH: Well, I think everybody comes into directing by a different route. My road to director came through my initial work as a visual artist and designer and that’s always been pretty invaluable.

All the way through my career I’ve always been looking to learn new skills. When I knew I wanted to direct, I moved from design into documentary specifically because I needed to move away from big and really sharp control of the imagery and think about storytelling. And you really learned about scoring storytelling when you do documentaries because you’re putting this story together in the edit.

Out of that, I felt ready to that to learn how to work with actors. That was just exhilarating and working in the theater allowed me to really focus on that. 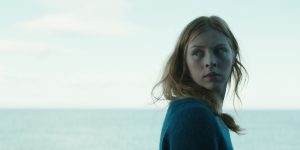 All of my, my visual scales were big concept terms of how you present the mise-en-panel on stage, but really it’s about performance. That opportunity to have big, six-week-long rehearsal processes, to run improvisation sessions, to really learn how to harness actor’s abilities and skills and really allow people to break free from acting. I’ve had learned those skills as a director and I bring those with me back into film.

That was really important for me in theatre and then going into TV drama. What’s valuable about TV drama, especially the kind of level that I work where the projects that I’m doing now are tens of millions of dollars, when you’re working at that kind of budget and you’re working with the best crew and you’re working with all the toys and you’re able to conjure the most beautiful and exciting imagery and you’re working with great actors. To have the experience in doing that and then making my first feature, which was made for two and a half million dollars, that I had those skills at my fingertips to, I hope, bring to life something that comes sufficiently to be what you’re looking for as an audience.

Sea Fever is available on VOD and digital on April 10th.