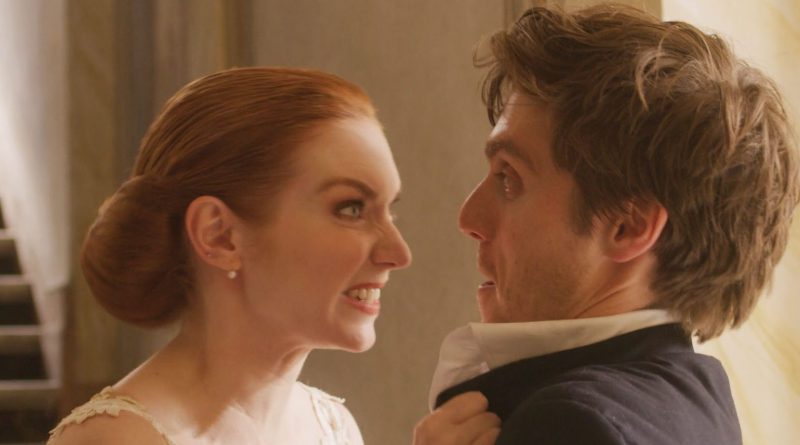 Sheltering in place during the pandemic? Looking for something to take your mind off the dead and dying? Okay, so you turn to Love Wedding Repeat, thinking it might be a lark of a film on Netflix. You settle in, ready to indulge with soda pop and pop corn.

You hope for a version of Love, Actually or Four Weddings and a Funeral from this British comedy. However, you get mush. The comedy starts out being a bit funny, if vulgar. You give the movie a break because it starts pretty in Italy, in a beautiful setting in summer.

As the convoluted story advances, you meet each member of the large cast. Jack (Sam Clafin of The Hunger Games) is to walk his Titian-haired sister Hayley (Eleanor Thomlinson of Poldark) down the aisle because their father is dead. Jack has a crush on her friend Dina (Olivia Munn of The Newsroom). A boring rogue named Sidney intervenes between Jack and Dina; Sidney sells car insurance, which he insists is not as dry as you think.

Jack’s old ex- shows up with her new boyfriend, who constantly compares his boy parts with Jack’s and comes up wanting. Hayley’s old lover Marc shows up uninvited, so she asks Jack to lace Marc’s Champagne with her sleeping potion. Rampaging children rearrange the place cards at the so-called “English” table. As a result, Jack is seated next to his ex-, not next to Dina, and, of course, the wrong person gets the draught. That predictable boo-boo should make Love Wedding Repeat a fast-paced farce.

It does not. It slows down to muddy sludge midway. Oh, it isn’t hideously awful. It’s just not delightful. The only hope of resurrection comes from, of all characters, Sidney, whose lines are pretty funny. They were written by director Dean Craig, who wrote the wretched Death at a Funeral, and also written by Francis Nief, based on the French film Plan de table.

The only things to keep you from planting your face in your homemade pop corn are Hayley’s really beautiful wedding dress and the seductive summer scenes in Italy. After admiring the scenery, there’s no shame in quitting.