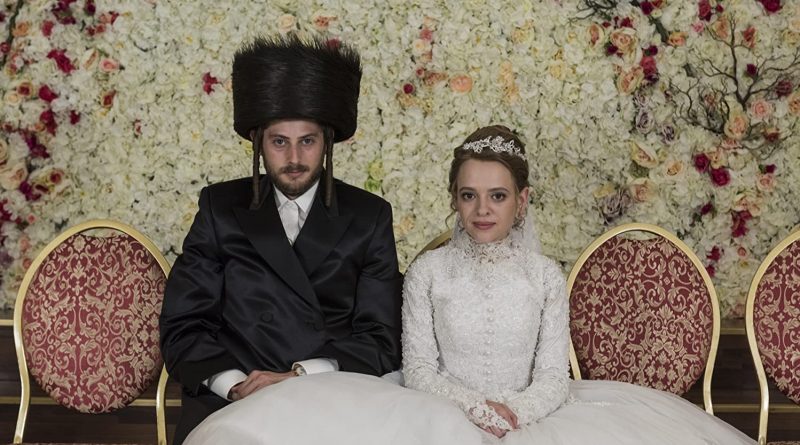 Inspired by Deborah Feldman’s 2012 memoir, this revelatory four-part mini-series follows the religious rebellion of 19 year-old Esther “Esty” Shapiro (Israeli actress Shira Haas) as she escapes from her strictly traditional husband and family in Brooklyn’s Satmar Hasidic community to fly to Germany with only a passport and some cash.

After deciding not to contact her estranged, Berlin-based mother (Alex Reid), who now lives openly with a lesbian partner, adventurous Esty makes friends with a diverse group of students at the Berlin Music Conservatory in whom she confides about her ultra-orthodox heritage, arranged marriage and desire to build a new life.

Meanwhile, since Esty is pregnant, the Rabbi dispatches her scandalized husband Yakov (Amit Rahav) a.k.a. “Yanky” to go after her, accompanied by menacing, chain-smoking Moishe (Jeff Wilbusch), who was previously ostracized from the restrictive Williamsburg community for some unspecified infraction of their repressive rules.

Adapted by Anna Winger & Alexa Karolinski and directed by Maria Schrader, the character-driven script with its unique specificity delves into the tightly controlled rituals of Orthodox Judaism, including shaving off the bride’s hair, the sterile mikvah, the choreographed wedding ceremony and the patriarchal denigration of women who cannot produce children.

FYI: The founders of this insular Hasidic sect came from the Hungarian town of Satmar. Now, most are culturally conservative descendants of Holocaust survivors who fled to New York after World War II. “This trauma was the driving force behind the ideological structures of this community,” explains Deborah Feldman. “They believe their refusal to assimilate will shield them from a repeat cataclysm.”

While the mini-series is enjoying tremendous popularity and Feldman wrote Exodus, a sequel about traveling in the United States with her son, there are no plans for a second season. According to Anna Winger, “We feel that we really told this story.”

On the Granger Movie Gauge of 1 to 10, Unorthodox is an enthralling 8, streaming on Netflix, along with the documentary Making Unorthodox.