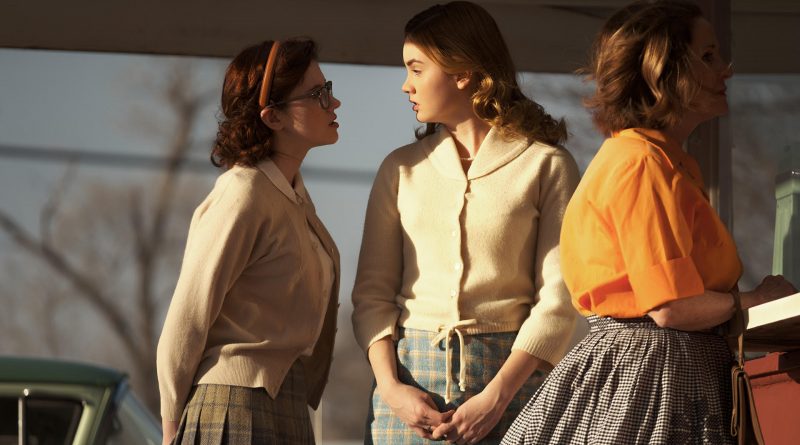 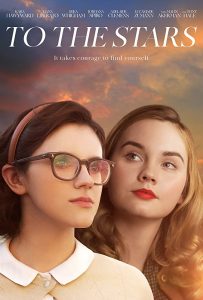 Hayward plays Iris Deerborne, a shy, awkward, misunderstood misfit whose high school classmates are merciless in their mockery and mistreatment. She finds an unexpected defender in Maggie (Liberato), who’s newly arrived from the big city and isn’t afraid to speak her mind — or to stand up for Iris. Maggie appreciates Iris’ authenticity — a stark contrast to the other primping, preening girls at school — while Iris appreciates Maggie’s take-no-prisoners attitude and confidence. Each can be her real self with the other.

Well, mostly. The girls’ friendship is ultimately tested by a turn of events that no one in town (except perhaps Maggie’s worried parents) saw coming but which speaks volumes about the painful social conformity of the time and place in which To the Stars takes place. None of it is unfamiliar territory for coming-of-age stories, but the film is compelling thanks to the core cast and Shannon Bradley-Colleary’s moving script.

In addition to Liberato and Hayward, Adelaide Clemens does good work as friendly town hairdresser Hazel. And several actors we’re used to seeing in comic roles — Jordana Sprio, Malin Akerman, and especially Tony Hale — prove capable of handling drama, as well. But To the Stars really belongs to its two stars, and they deliver a memorable friendship story that ends on a note of empowerment. — Betsy Bozdech

Nell Minow: Two of the most talented young performers today, Liana Liberto and Lucas Jade Zumann, shine in this sensitive story about growing up in 1960’s Oklahoma. Director Martha Stephens skillfully evokes the pettiness and unspoken longing of small town life and gets wonderfully natural performances from her young actors.

Leslie Combemale Every woman remembers high school with some level of distain, even those of us who went to all girl boarding schools. There were always horrible people, and unless you were one of them, it was a mine field just to get to graduation. This Movie of the Week, director Martha Stephens’s To the Stars, examines that universal experience from the perspective of two 60s era young ladies, shy home-towner Iris (Kara Hayward, whom you’ll remember as Moonrise Kingdom’s breakout star) and glamorous, fearless transfer student Maggie (Liana Liberato). Though neither the plot nor the dialogue treads much new territory, it honors the considerable struggles of the LGBTQ+ “other” that were and still are a part of life in god-fearing middle America. Tony Hale in particular shines as Maggie’s stilted, narrow-minded father. Gratefully, To the Stars doesn’t end as so many do when it comes to stories of gayness on film. With strong female leads, and a writer, director, and lots of women below the line, including a score by Heather McIntosh, To the Stars is a gentle, engaging film well-executed on all fronts.

Loren King A bittersweet coming of age drama set in small town 1950s Oklahoma where the film was shot, To the Stars recalls The Last Picture Show in its bleak but realistic depiction of how repressive such a time and place was for women. High school seniors Iris (Kara Hayward) and Maggie (Liana Liberato) struggle to find their place outside a clique of mean girls. Their limited options are represented by the women around them, from Iris’s frustrated, alcoholic mother to quiet, kind Hazel (Adelaide Clemens), the trapped owner of the local beauty salon whose plight veers into The Children’s Hour melodrama but remains heartbreakingly believable.

Jennifer Merin Director Martha Stephens’ To The Stars is a coming of age drama that takes place during the 1950s in a rural Oklahoma farming community where family dysfunction and stiflingly conformist social intercourse are the norm. The new girl — a self-proclaimed sophisticate — who moves to town challenges long-standing friendships and, from day one at the high school, shakes up the student’s clique-y hierarchy. Shannon Bradley-Colleary’s script and a fine female-centric ensemble lead by Jordana Spiro, Malin Akerman, Kara Hayward and Liana Liberato make for an insightful and entertaining observation of small town small-minded life. And. the unexpected denouement is an unforgettable, impactful twist.

Cate Marquis To the Stars, director Martha Stephens’ coming of age drama set in rural 1950s Oklahoma, is not about space travel or even science fiction as the title might suggest, but about two teen-aged girls struggling to break free of their earthbound lives and reach for the stars of their hopes and dreams. The tale focuses on Iris (Kara Hayward), a shy social outcast who is a particular target of the small-town high school’s mean girls clique. Into this hothouse environment suddenly comes a girl from “the big city,” Maggie (Liana Liberato), who breezes in with an air of sophistication and confidence, and upsets everything, in part by befriending Iris. It is the ’50s, the height of enforced conformity, rigid gender roles and male-dominated double standards but this is also a tale of family secrets and frustrated dreams. With a fine cast and nicely crafted script, To the Stars explores both the stifling restrictions of its time period and and of the timeless struggles of adolescence.

Liz Whittemore To the Stars is a beautifully written and stunningly acted film. While it takes place during the 50’s in rural Oklahoma, the themes are just as relevant today. It tackles identity, fear, boldness, and regret all through a close-knit population of a small town. Performances from the mostly female cast are captivating. As women are still often expected to be seen and not heard, this film is an exceptional example of how the tiniest of challenges make the biggest waves. There’s a charm about the script and a genuine heart that will resonate with any viewer. To The Stars is heavenly.

Susan Wloszczyna: To the Stars sometimes feels earthbound by melodramatic tendencies as it unfolds in a small-minded Oklahoma town in the early ‘60s. What saves this coming-of-age drama from simply being a farm-land Peyton Place that centers upon female social politics are its two leading ladies. Kara Hayward, who shone in her debut in Wes Anderson’s Moonlight Kingdom years ago, is mousy misfit Iris who is targeted both by male bullies and uppity girls at her high school. It doesn’t help that a bladder problem has earned her the nickname “Stinky Drawers.” Read full review.

Title: To the Stars