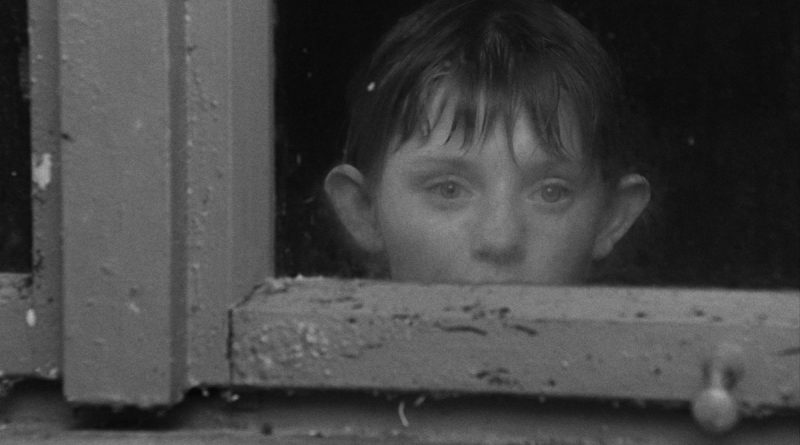 With minimal action, at seven and a third hours, Hungarian director Béla Tarr‘s Sátántangó asks a lot from a viewer, and it rewards that commitment to a viewing marathon. Given time to look, the texture of the physical and psychological worlds deliver emotional force. Viewers don’t watch these select individuals, they live with them in deeply compromised, difficult circumstances.

Amidst rain and wind, in the mud and in sparse habitats, in extreme long shots and extreme close-ups, these eight primary residents speak seldom but poetically and insightfully as well as inanely. After their collective farm (called the estate) has folded, they now cope with adultery, theft, death, alcoholism, and deception. Their faces, studied in detail, become naked landscapes of pain and pleasure, desperation and betrayal over promises of a better life.

Characteristic of Béla Tarr, extended takes dominate, sometimes with a very slow tracking shot (an eight-minute one introduces the film), at other times scrutinizing interaction with unnerving, quiet intensity. One scene in the local bar builds from a long, frantic, alcohol and accordion driven whirling dance into a tango, ending with most participants passed out. Screen titles announce twelve chapters (e.g. The Work of the Spider; Heavenly Vision? Hallucination?; Nothing but Work and Worries), ominous music reinforces anxiety, and Gábor Medvigy’s cinematography is spellbinding.

Thankfully warned ahead of time, I skipped one scene approximately halfway through the film that involves grotesque animal torture, totally unnecessary. I object to any such abuse, even when assured the cat, in this case, was not harmed. Aside from that, Sátántangó presents an astonishing, microscopic look at the raw human condition. Most telling and an appropriate description, Irimiás, a central figure, says, “Think of me as a tragic researcher investigating why everything is as terrible as it is.”

Adapted by director Tarr and László Krasznahorkai from his 1985 novel, often listed among top films, Sátántangó, a 1994 masterpiece, has been beautifully restored. The black-and-white images shine. In Hungarian with English subtitles, Sátántangó streams from April 24 to May 4 through the following Webster University link to Arbelos Films.