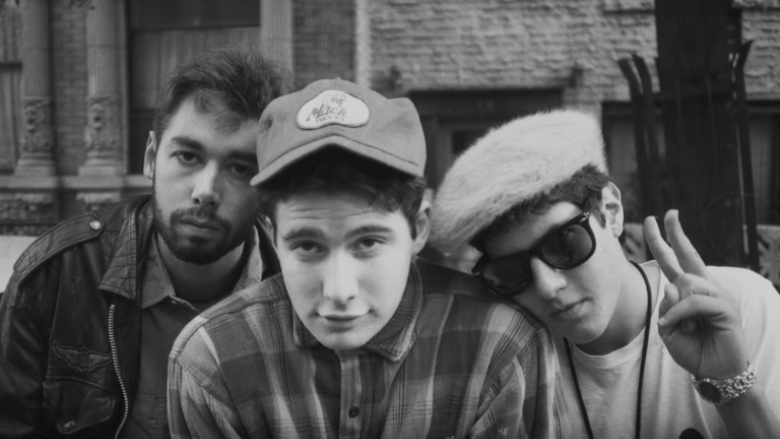 First came Beastie Boys Book: a hefty 571-page tome detailing decades in the lives of Michael Diamond and Adam Horovitz, as well as their friend and long-term collaborator Adam Yauch. Then, that memoir became live stage performance Beastie Boys Show, with the men also known as Mike D and Ad-Rock taking to the microphone not to rap, as they long have alongside the dearly, sadly departed MCA, but to talk through the ups, downs, highs and lows of their history together. Now, the book and stage show have segued into Spike Jonze-directed documentary Beastie Boys Story, blending those on-stage chats with informative, frank and funny archival material. Whichever way audiences choose to relive this tale, it’s a wild and entertaining ride as told in the group’s trademark irreverent manner. As a film, it’s also candid, reflective and thoughtful — re-examining the past with clear eyes, and never leaning lazily upon the Beasties’ status in popular culture.

None of this should surprise anyone with even a passing interest in the New York-formed band, or those who’ve ever noticed, even subconsciously, that their sound can’t be pigeonholed. With Diamond, Horovitz and Yauch’s rhyme-slinging voices as a constant, the Beastie Boys’ brand of hip hop incorporates everything from punk and rock to funk and jazz, continually changing and shifting across the 28 years the trio released new music. From the satirical (You Gotta) Fight for Your Right (To Party!), to the heavy bass of Sabotage and the dance floor beats of Body Movin’ — just to name a few of their biggest hits — the Beastie Boys turned every track and album into a fresh creative quest. The result: an eclectic discography that valued curiosity, challenge, evolution and engaging their listeners over ever merely doing the same thing again and again.

Jumping through their lives in a linear fashion, as demarcated in chapters and set to the obvious soundtrack, surviving Beasties Diamond and Horovitz explain how this came to be the case. That said, it’d mischaracterise the film, and the duo’s re-interrogation of their own story, to say that they indicate any of it was planned. Beastie Boys Story and the works it draws upon are highly personal pieces that look back, tell it like it is — like Diamond and Horovitz remember, crucially — and ruminate, letting insights, musings and revelations follow. Other than the Beasties’ friendship with each other, there’s no overarching template dictating the shape of their lives and careers, and the film and its central pair don’t ever pretend otherwise. While record executive Russell Simmons’ proclamation that they were going to be stars definitely gets a mention, Beastie Boys Story charts the organic ebbs and flows, wins and mistakes, and hits and misses that brought these “three bad brothers” to every juncture.

No one is rewriting or sugarcoating the past here, or taking anything too seriously. Instead, viewers experience the joys and rough patches through Diamond and Horovitz’s unflinching, self-probing eyes. They tell their tale engagingly, even cheekily and a little brattishly — but staring steadfastly at both their successes and failures, and surveying how that made them grow as people and as a band, is the primary agenda item. That, and doing what every great music documentary should: contextualising the Beasties’ place in history while capturing how it felt as Diamond and Horovitz (and, by extension, for Yauch) chased teen dreams, opened for Madonna and lived the partying lifestyle they’d always made fun of, discovered what did and didn’t make them happy as artists and people, and worked hard to plot the course that suited them best.

Accordingly, they joke about their adolescent selves, and rib each other playfully, as lifelong friends do. They jest with the unseen Jonze, with the Being John Malkovich, Where the Wild Things Are and Her filmmaker sharing their path ever since he started directing their music videos in the ‘90s — including that iconic 70s cop show-style Sabotage clip. They’re upfront not only about the thrills along the way, but the disappointments. They call out their regrets, be it letting life on the road go to their heads, ditching original drummer Kate Schellenbach, the lyrics to Girls, record company struggles or blowing money renting a Los Angeles mansion. They wax lyrical about their influences, the New York they grew up in, and the music and people they loved. And, when Horovitz sits down to discuss the topic everyone knows is coming — Yauch’s absence, and the effect his death from cancer had on the band — it’s a tender and heartfelt moment that makes it plain why the Beastie Boys could never have gone on without him.

Stitching all of the above together might seem easy, especially with a stage performance also directed by Jonze providing the bulk of the material. But there’s an art to Beastie Boys Story that ranges beyond its status as a filmed version of Beastie Boys Show. It’s there in the structure, with Diamond, Horovitz and Jonze immersing the audience in every detail. It’s present in Autumn Durald’s cinematography, whether focusing closely on Diamond and Horovitz, or providing a sense of the stage, theatre and crowd. And, it’s apparent in the savvy interweaving of footage, photos and music that’s instrumental to this tale, all adding to a mood that’s equal parts loose, intimate, contemplative and energetic.

The documentary’s success might be most evident, however, in the feeling that it evokes in viewers — not that they’re just watching Diamond and Horovitz reminiscing about times good and bad, but that they’re taking that same journey as well. A coming-of-age story as much as a musical chronicle, Beastie Boys Show whisks both the diehard fans and the casually acquainted along for the ride, in a film that’s as laidback and personal as two guys talking should be, as sweeping and era-defining as a portrait of a major music act should as well, and as steeped in the evolving vibe, atmosphere and attitude that’s always made the Beastie Boys who they are.