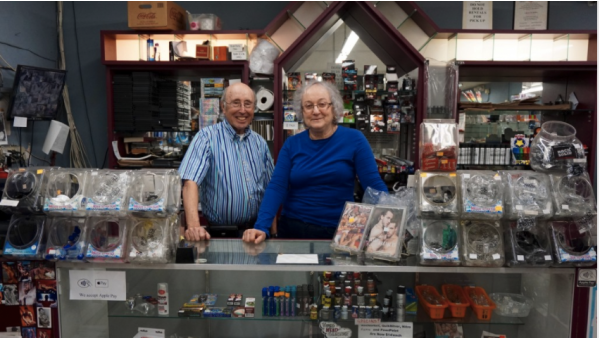 Directed by daughter Rachel Mason and featuring her parents, Karen and Barry, and brothers, Micah and Josh—Circus of Books explores the paradoxes of growing up the children of an ordinary, genial couple who owned and operated the most famous gay porn shop in West Hollywood. On the one hand, bar mitzvahs, family dinners, school life and trips to the playground, on the other being told to “look down” whenever mom had to stop by work while ferrying around the kids. Not that they did—“wandering eyes,” recalls Josh, while Micah recounts the sad tale of finding a videocassette in the car and patiently waiting months for the opportunity to sneak a peek… only to discover that it was a beta tape and they had a VCR. It wasn’t that Karen and Barry were ashamed of what they did for a living; they were just afraid their kids might be shunned if their friends’ parents found out.

The Masons never planned to be smut peddlers. Young Karen Keller wanted to be a journalist and wrote for both the Wall Street Journal and the Cincinnati Enquirer, covering the courthouse beat. She wrote about raids on adult businesses and interviewed both Larry Flynt and Supreme Court Justice Barrett Powell, who famously observed that he couldn’t define obscenity, but knew it when he saw it. And for the record, he was talking about Louis Malle’s 1963 The Lovers, which, in his opinion, was not an obscene film. Barry had worked in optical special effects (his credits include both 2001 and the Star Trek TV series) and was a tinkerer who invented a dialysis accessory because his father was diabetic; for a while it generated a nice income.

Rachel Mason—who, a brief clip establishes, was shooting video of her family as a kid—had the good fortune to be born into a family whose personal history intersected with broader historical events. And she was willing to dig into areas that exposed issues which doubtless made for some uncomfortable moments–her mother was fine with running a “hard-core gay adult business,” less so with learning that one of her own sons was gay.

But as much as Circus of Books is a portrait of a nuclear family, it’s also one of a larger family—an extended one; interviews with many former employees make it clear that working there was more than a job. Circus of Books was a safe space, somewhere gay men could meet without fear of being harassed and could browse books, magazines, videos and, later, DVDs, without worrying that they might be unintentionally outed. Circus of Books was part of a parallel world where being gay was neither good nor bad; it just was, say decades worth of employees whose lives were deeply intertwined with both those of the Masons and a community ravaged by the “plague years,” during which the Masons became increasingly aware of how many of their employees were both desperately ill and estranged from their own parents.

If you had to choose a moment that crystalizes the Mason family values, it would the one in which Barry says he simply cannot comprehend how any parent could abandon his or her sick child; that’s the beating heart of a movie about a business that intersected with culture-changing history and reaffirms that sometimes it’s possible to do good and do well at the same time.