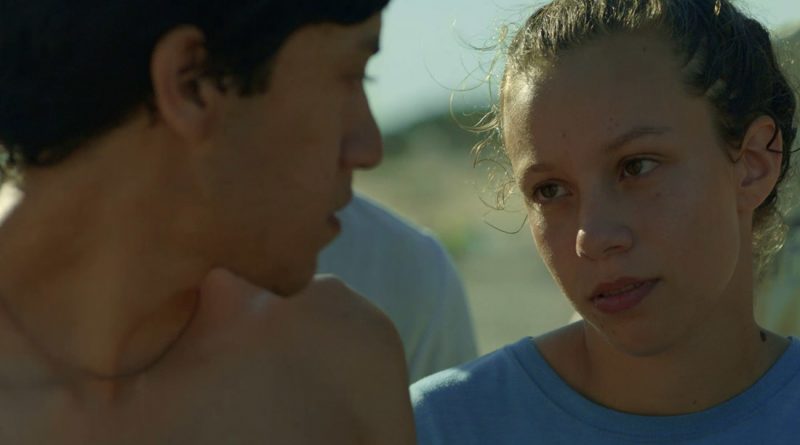 Uruguayan filmmaker Lucía Garibaldi’s first full-length feature The Sharks, tells the story of Rosina, a quiet, 14-year-old who seems out of sync with the world around her. The set-up is familiar: she’s not close to her parents, she has issues with her sister, and she doesn’t have a lot of friends. But when the teenager spots sharks of the coast of the quiet resort town she lives in, she finds herself in the middle of the drama. Few believe she saw the sharks but the fear of not knowing and what the possibility of sharks could mean for a town dependent on tourism sets many on edge.

Central to all of this is Rosina’s self-discovery. Amidst the drama unfolding around her, she gets a job working with a crew of men doing home maintenance jobs and falls for one of her co-workers Joselo, a soft-spoken young man who is much older than her and while he’s attracted to her, he’s also cautious of the fact that she’s still a child and he’s not. But Rosina is undeterred and devises a series of plans to get herself alone with Joselo; plans which mostly don’t work.

There’s much to relate to in The Sharks: the feeling out of place from those around you, the constant pining for someone you crush on, the depth of loneliness that feels all consuming. While I really liked aspects of Garibaldi’s film, particularly Rosina’s unabashed attempt to lure her crush, I found myself uninterested in the rest of the drama which retreads familiar territory in a way that’s not particularly interesting. The side story of the sharks off the coast makes for interesting dramatic tension that is paralleled in the unfolding events of Rosina’s life but the connection is vague and feels like just another thing that’s happening in the world.

While I had issues with the storytelling, I love the performances, particularly from newcomer Romina Bentancur as Rosina who gives a very vulnerable and raw turn as a young woman on the verge of sexual awakening. I was also drawn in by Antonella Aquistapache as Mariana. Rosina’s sister is largely a background player but I found myself completely drawn to her and the drama unfolding in her life; so much so that I wanted to know more about it and about her.

Garibaldi’s film is a leisurely told tale of desire that unfolds in the brink of summer and while I love a satisfying coming of age movie that captures the turbulent coming-of-age period of one’s life, I found The Sharks wanting for drama despite some memorable moments.